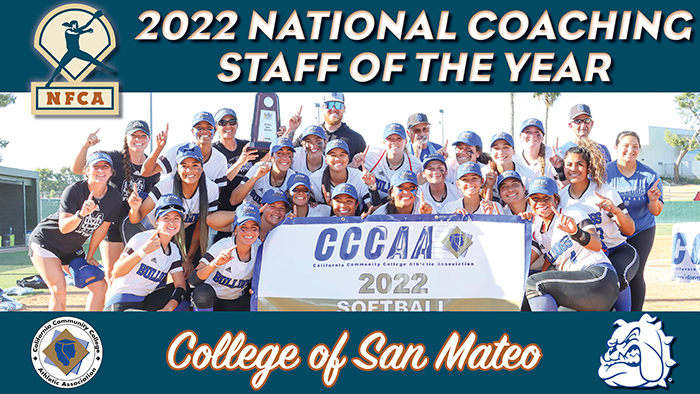 Earning the honor for the second consecutive year, head coach Nicole Quigley-Borg and her staff guided the Bulldogs to their first-ever state title with an 8-1 victory over Sierra College in the decisive winner take all contest. It was the eighth straight state championship tournament appearance for the Bulldogs, who last reached the title game in 2015.

Quigley-Borg, along with assistant coaches Dale Bassmann, Toby Garza, Matt Lawrence, Lauren Quirke, Allie Stines and Randy Villazon steered San Mateo to a 44-4 record and sixth straight Coast Conference North championship with a perfect 12-0 mark. In the state playoffs, the Bulldogs posted an 8-2 record, which included two wins over Sacramento City in the Super Regionals after dropping the opener.

Under the coaching staff’s tutelage, the Bulldogs were one of the top offensive teams in the CCCAA, hitting a league-best .385 and topping the CCCAA charts with 49 home runs, 401 runs scored, 133 stolen bases, 375 RBI, a .447 on-base percentage and .604 slugging percentage. In the circle, San Mateo pitchers recorded the leagues’ fifth lowest ERA at 1.38.