2011 NFCA Convention Gets Off To Lucky Start in Las Vegas 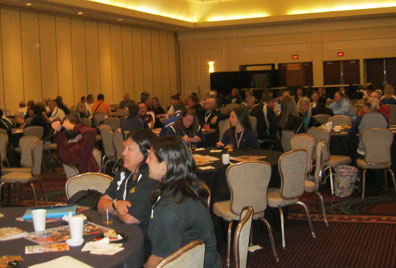 LAS VEGAS, Nev. – The 2011 NFCA National Convention got off to a big start on Wednesday with an insider’s look at recruiting, a celebration of one of the biggest pieces of legislation ever and a Mexican fiesta to end the night.

The day began with an annual pre-convention seminar that featured the president of Tudor Collegiate Strategies Dan Tudor. Tudor went over the ins-and-outs of the recruiting process for coaches and left the audience with the information they needed to help recruit the classes they want.

The afternoon saw several committees convene for their annual in-person meeting. Committee meetings at the convention give members not only a chance to set their agenda for the year, but also the opportunity to meet people they served with, often for the first time.

After committee meetings, the membership gathered in the ballroom for the opening session. After presentations from NFCA President Patrick Murphy of Alabama and NCAA Secretary and Rules Editor Dee Abrahamson, NFCA Executive Director Lacy Lee Baker gave members an update on the state and growth of the Association.

Following Baker’s presentation, Olympic Gold Medal winner and senior director of advocacy for the Women’s Sports Foundation, Nancy Hogshead-Makar spoke on the importance of the landmark piece of legislation known as Title IX as the 40th anniversary approaches.

After the general session, the evening ended with a time of networking and socializing at the Louisville Slugger reception. Along with Mexican food, the reception also featured a DJ that helped set a relaxed, informal atmosphere.

On Thursday, each membership division will conduct business meetings, coaches with win milestones will be recognized at the Easton Victory Club luncheon, CEO of the Program, Erik Kapatulik will speak on sustaining a championship culture, the mentoring session will take place for the second year and the annual softball summit will be held.