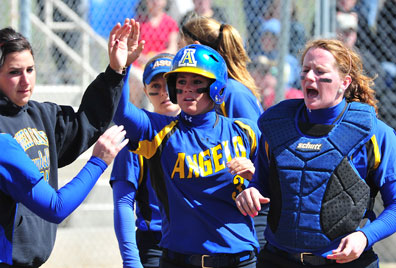 STARKVILLE, Miss. – After a crazy week, Angelo State became the third team in as many weeks to top the NFCA Division II Top 25 poll in the latest edition of the weekly rankings, the Association announced on Wednesday.

At 25-3, the Rambelles received 11 of the 16 first-place votes in the most recent poll to top the rankings for the first time since March 23 of last season. Valdosta State (25-3) followed behind Angelo at No. 2 this week and received two first-place votes, while previous No. 1, North Georgia (28-6), fell to third despite receiving one first-place vote.

Indianapolis (22-1) jumped up two spots to fourth and also received a first-place vote, while Winona State (19-2) moved from seventh to fifth to round out the top five. Cal State Chico (20-5) received the final first-place vote this week and moved from ninth to sixth.