California Punches Semifinal Ticket at WCWS With Win Over Oregon 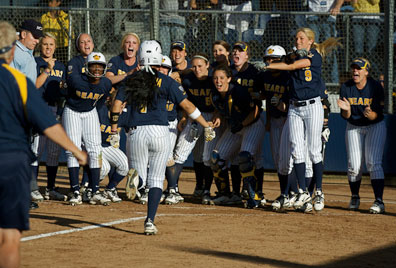 OKLAHOMA CITY, Okla. – California’s Jace Williams and Victoria Jones each had home runs in Saturday’s 6-3 win over Oregon at the Women’s College World Series that eliminated the Ducks and sent California to the national semi-finals for the first time since 2004.

The first of the two long balls for California came in the first inning when Williams sailed one into the stands in center field, scoring Britt Vonk and Frani Echavarria in the process, to give Oregon the early 3-0 lead.

The Golden Bears (58-6) pushed their lead out to 5-0 in the second inning when Britt Vonk doubled to right field, allowing Jamia Reid and Danielle Henderson to cross the plate. In the next inning, the Ducks finally got on the board with a home run of their own, a solo shot to centerfield courtesy of Samantha Pappas.

California got the run back in the top of the fourth on its second home run of the night, this time a solo blast from Jones. However, the Ducks were not quite done and staged a rally in the sixth. Oregon pushed across two runs in the frame thanks to a two-RBI double from Sara Goodrum.

However, California shut down the Ducks in the bottom of the frame with pitcher Jolene Henderson retiring the side in order.

Following the game, California head coach Diane Ninemire talked about the resiliency of her team after yesterday’s loss to Oklahoma and the fact that they have not lost consecutive games this season.

“That is the way they have been all the way through this year. They have just have just had tremendous heart, great will and have just been really resilient. That is their character and that is what has made them the team that they are this year. Hopefully, they will come out tomorrow and be even more resilient.”

Henderson is now 38-3 on the year after going the full seven on Saturday and allowing three runs off of six hits with nine strikeouts. Jessica Moore took the loss for Oregon and fell to 33-15 to end the season after giving up six runs on eight hits with two walks and five strikeouts.

The loss brings Oregon’s season to a close with a record of 45-18. The Ducks made just their second-ever trip to the WCWS in 2012 and their first since 1989.

On Sunday, California will take on Alabama for a spot in Monday’s WCWS Championship Series. However, if California were to advance they would need to beat Alabama twice. The first game between the two teams is scheduled for 2:30 p.m. CT, with the “If Necessary” game to follow at 8:30 p.m.