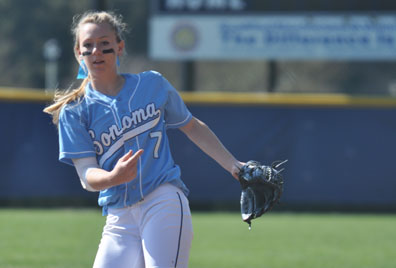 Timmermans helped the Bronchos push their win-streak to 29 this week with four wins at home. Over the home stand, the senior went 7-for-11 with 12 RBIs, 10 runs, four walks, three home runs, a double and a stolen base. She ended the week with .636 batting average, .733 on-base percentage and a 1.545 slugging percentage.

The native of Oldenzaal, The Netherlands put up big numbers all week, but none were bigger than her first game against Truman State on Sunday. Timmermans went 3-for-5 in the contest with two home runs and nine RBIs, including a walk-off grand slam that gave her team the 12-8 win.

The catcher is now the second Broncho to earn Player of the week honors this season, as teammate Megan Whitmire earned the honor on March 7.

Lipperd had a monster nine-game stretch last week and played an integral role in the Seawolves run to the bronze championship at the Tournament of Champions in Turlock, Calif. She finished the week with an 8-1 record, a 0.76 ERA, and an opponent’s batting average of .136. Of the 240 batters she faced last week, Lipperd struck out 114 of them.

The Boulder Creek, Calif., native had two highlights last week with the first coming in an 11-inning marathon with Hawai‘i Pacific on Friday. Lipperd set a new NCAA single-game record in the game by striking out 26 batters, three better than the previous record. On Saturday, the junior tossed the fifth no-hitter of her career in a win 4-0 over Hawai‘i Hilo. She ended the week eight complete games, five shutouts and six 10-plus-strikeout performances.