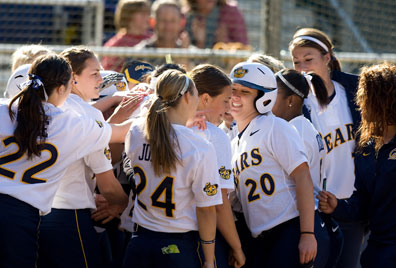 STARKVILLE, Miss. – For the seventh time this season, California topped the latest USA Today/NFCA Division I Top 25 poll, when it was released by the Association on Tuesday, and will take the ranking into the final week of regular-season play.

For just the second time in their seven-week streak of coming in at No. 1 in the rankings, the Golden Bears (48-3) received all 30 first-place votes. California is the only school this season to be named as a unanimous top choice.

In the rest of the top five, Arizona State (45-5) stayed at No. 2 for the second consecutive week, while Alabama (47-6) remained at third. Oklahoma stayed put at fourth in the latest poll, while Tennessee (45-9) used a run-rule victory of ninth-ranked Louisville (50-3) to round out the top five in fifth.

Joining the poll this week for the first time since March 8, 2011, was Syracuse (40-13). The Orange checked in at No. 24 after taking two out of three games from then 16th-ranked USF last week in a crucial BIG EAST series.