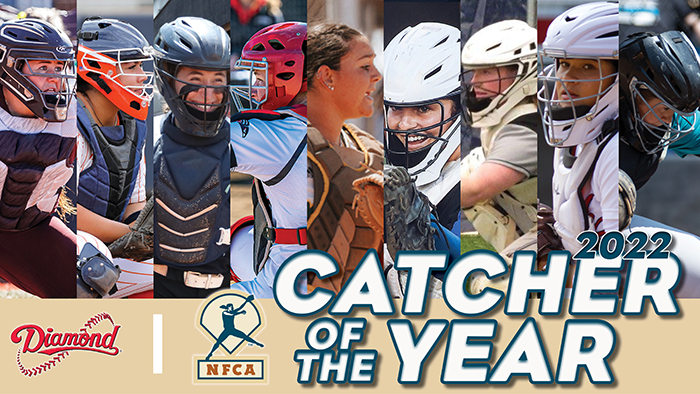 LOUISVILLE, Ky. – Over the course of the NFCA’s collegiate awards season, the Association recognized nine student-athletes as Diamond Sports/NFCA Catchers of the Year. Announced during a division’s All-America or Special Awards release, the distinction is bestowed on the student-athlete, who was voted a first-team All-America catcher.

This year’s Diamond Sports Catcher of the Year recipients are as follows:

Davidson, who earned her second All-America honor, is the second Bulldog to be named a Diamond Catcher, joining three-time winner Chelsea Bramlett. She played a pivotal role in helping the Bulldogs reach and host their first-ever Super Regional. An All-SEC first teamer, Davidson hit a team-leading .366 and ranks top-15 nationally with 23 home runs, .545 on-base percentage, .854 slugging percentage and 140 total bases. Davidson threw out nine runners on the season.

Ashley Perez – University of Texas at Tyler
Along with a fourth All-America nod, Perez captured her third Catcher of the Year award, earning two of those at Division III (2018, 2019). She is the fifth three-time honoree – Chelsea Bramlett (DI - Mississippi State), Jaci Smith (NAIA – Oklahoma City University), Stacey Nuveman Deniz (DI – UCLA) and Kristen Rivera (DI - Washington) - dating back to the inception of the award in 1997. Leading UT Tyler to a national semifinal in its first official season of Division II eligibility, Perez was the Patriots’ offensive catalyst with a .436 batting average, 18 doubles, 10 home runs, .704 slugging percentage and 78 hits.  She posted a .994 field percentage and threw out 10 runners attempting to steal.

Jackson, a two-time All-America honoree, is the first recipient from Berry College. She keyed the Vikings to the best season for any program in the school’s Division III history with a national semifinal appearance and a No. 4 ranking in the final NFCA DIII Top 25 Coaches Poll. Jackson, a Top 25 finalist for the 2022 Schutt Sports/NFCA Division III National Player of the Year,batted .396 and led the squad with 13 doubles, four triples, 46 RBI, 112 total bases and 61 hits (tie). She also homered 10 times, slugged .727 and reached base at a .451 clip. Defensively, Jackson was perfect in the field in 218 chances.

Riley Donovan – Southern Oregon University
Donovan, a two-time All-American, batted .481 with an NAIA-best 89 RBI, 88 base hits, 178 total bases and 51 walks. Donovan recorded the second highest home run total (20) and slugging percentage (.973), and the third best on-base percentage (.973), while ranking fourth in doubles (22) and sixth in batting average and runs scored (70). She sported a .990 fielding percentage and threw out nine runners attempting to steal.

Jasmine Moreno – Yavapai College
Moreno, who earned her first All-America honor in 2022, helped the Roughriders to a school-record 57 wins and a fifth-place finish at the NJCAA DI National Championship. She hit .473 (88-for-186) with 21 doubles, 21 long balls, 77 RBI and 63 runs scored. Moreno slugged .925 and recorded a .569 on-base percentage. Behind the dish, Moreno was nearly perfect, committing just one error in 354 chances for a .997 fielding percentage and threw runners out at a .351 clip (13-for-37).

Sabetha Sands – Murray State College
Sands, a unanimous first-team All-American, keyed the Aggies to a national runner-up finish. She hit .351 with 19 doubles, 8 home runs, 62 RBI and 52 runs scored. A strong defensive presence behind home plate, Sands was nearly perfect, committing just one miscue in 383 total chances for a .997 fielding percentage, while throwing out 10 would-be base stealers.

Rainna Stangle – St. Cloud Technical College
Stangle batted .597 and drove in 84 runs and scored 72 times, all third-best in NJCAA DIII, while her 19 home runs ranked second. She also registered 84 hits, which ranked fourth, had 12 doubles and drew 28 walks (3rd). Behind the dish, Stangle threw out five runners in 16 attempts for a .313 caught stealing percentage.

Davis won the league’s home run title with 30 long balls and finished second overall with 106 RBI. She was also third in slugging (1.049) and seventh in hits (87). Davis posted a .991 fielding percentage with 208 putouts and 23 assists to just two miscues on the season. Playing a pivotal role in Mt. Hood’s NWAC title, she was named the NWAC Tournament Most Valuable Player, going 12-for-16 with five homers, 22 RBI and nine runs over the Saints’ 5-0 tournament run.

The NFCA (National Fastpitch Coaches Association) is the professional organization for fastpitch softball coaches. Known for its highly-regarded Diamond Sports Catcher of the Year Awards, the NFCA also educates and supports softball coaches on a variety of different levels: from podcasts to a comprehensive drills database, to in-person events and a National Convention.