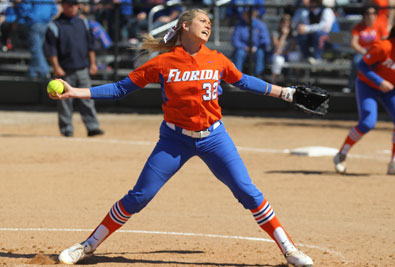 STARKVILLE, Miss. – Senior pitcher Stephanie Brombacher has been named as the NFCA Division I National Player of the Week for games played Feb. 14-20, the Association announced on Tuesday.
Brombacher was 3-0 on the week and allowed no runs off of just 10 hits with only three walks and 16 strikeouts over 17 innings of work.

The Pembroke Pines, Fla., native threw two complete game shutouts on the week, with both of them coming against then-No. 22 North Carolina. In her other appearance last week, Brombacher allowed just one hit over five innings in a mid-week tilt against Jacksonville.

In six appearances so far in the 2011 campaign, Brombacher is 6-0 with just 14 hits, five walks and 35 strikeouts. She also has not allowed a single run, earned or unearned, this season.

With a three-game sweep of the Tar Heels and the win over Jacksonville last week, the fourth-ranked gators are now 9-0 on the year. This week, Florida travels to Palm Springs, Calif., for the Cathedral City Classic where they will play five games, including contests against No. 2 UCLA and No. 11 Texas.


Other Top Performances
Hawaii’s Jessica Iwata hit .526 on the week with three home runs vs. No. 17 Stanford… Katelyn Boyd of Arizona St. went 9-for-10 on the week and was perfect at the plate in three of four games… Texas’ Blaire Luna went 3-0 on the week with two shutouts and 32 strikeouts.