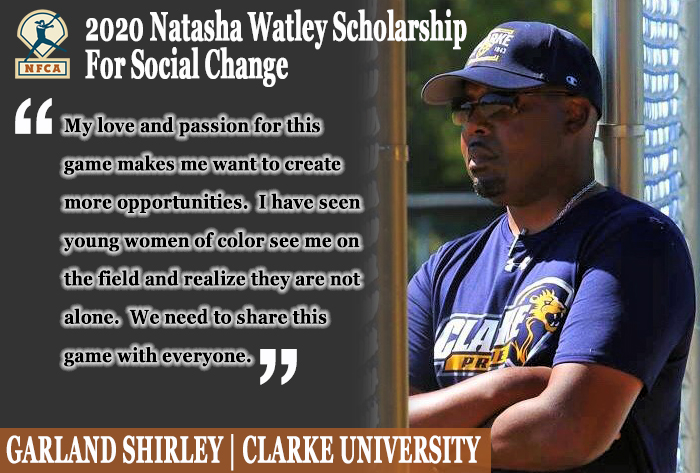 The scholarship is presented to an individual who embodies courage and commitment to break down barriers, create change within the sport, and has a need for financial assistance to attend the NFCA National Convention.

"Congratulations to coach Shirley," said Watley."He exemplifies exactly what this scholarship is all about. Garland has continued to not only be an example of excellence, but continues to generate opportunities and impact others around him."

Shirley has spent his entire 22-year coaching career in the state of Iowa, starting in the youth and prep ranks, before entering the collegiate landscape, where he currently holds the position at Clarke. He dove into the coaching ranks with the South Des Moines Girls Softball Association (1998-2008), serving in many capacities, including several years as the league president. During this stretch, he coached travel teams (10U, 12U, 14U) and ran a successful club program, MSA Softball, which played a role in dozens of players going on to play at the collegiate level.

Shirley’s early success led him to be hired at Van Meter (Iowa) High School in 2008 as the first African-American head softball coach in Iowa. He rebuilt the program, turned it into a highly-ranked team in the state and steered the Bulldogs to the 2012 state tournament for the first time in school history. While at Van Meter, Shirley hired longtime friend Daryl Dotson, who went on to become the head coach at Des Moines North High School and the second African-American head coach in Iowa. The 2012 Central Iowa Class 2A Coach of the Year concluded his high school career at Ankeny Centennial, coaching at the highest level in the state and leading the Jaguars to a pair of regional championship appearances before his retirement in 2016.

“Garland has created an opportunity for Black girls to participate in the game of softball at the collegiate level by making it a priority to recruit Black girls on his teams,” said Dotson. “Garland also had the vision to run a few softball camps in our hometown of Waterloo, Iowa, in the neighborhood that we grew up in. He is always thinking of new ways to get Black girls involved in the sport of softball.  He gave the opportunity to my oldest daughter to get involved in softball when I was stationed overseas during my time in the military. This gave my daughter something to do during spring and summer months when I was gone. She had softball to focus on instead of her dad being gone.  Garland was a father figure to my daughter in my absence.  He has been a father figure to many of the players he has coached over the years.”

Shirley entered the junior college coaching ranks in 2013 as an assistant at AIB College of Business (Des Moines, Iowa). After the institution closed its doors in 2015, Shirley moved on to Marshalltown Community College (MCC) (NJCAA DI) as the program’s head coach. While at Marshalltown, the Tigers captured more wins in two seasons than any other two-year span in school history, had several NFCA All-Region student-athletes, and one NFCA All-American. In the fall of 2017, he had a bilateral lung transplant for scarring from a 2007 lung injury that forced him to retire from being a Des Moines firefighter and paramedic specialist. He missed the fall season, but returned in the spring and did not miss a contest.

Also during his time at MCC, he started softball clinics in Waterloo, Iowa to introduce the game of softball to students of color and made an impact on those who attended. To this day, Shirley is committed to developing a committee that is dedicated to creating opportunities for youth players, coaches, and officials of color or individuals from disadvantaged communities. His advocacy is a response to the state’s low number of softball players of color and lack of African-American coaches hired since his retirement.

Entering his third season at Clarke, Shirley is a staff representative for the University’s Diversity, Equity and Inclusion Committee and is also a member of the NAACP.

“Garland is committed to working to overcome obstacles to create educational and athletic opportunities for his community,” said Kate Zanger, Vice President for Student Life at Clarke University. “He is working to develop a series of free camps in disadvantaged communities, as he did in 2016 and 2017. I am confident that Garland’s experience and motivation will be an asset to him as a leader in creating the necessary change to grow the game of fastpitch for Black girls in Iowa.”

ABOUT THE SCHOLARSHIP
The scholarship is awarded to a Black coach who has created educational or athletic opportunities for their community, has removed and overcome obstacles through social change, or has opened doors for growing the game of fastpitch for Black girls or women. The scholarship is presented to an individual who embodies courage and commitment to break down barriers, create change within our sport, and has a need for financial assistance to attend the NFCA National Convention.

Recipients receive a complimentary NFCA Convention registration, travel reimbursement up to $700, up to four nights paid at the Convention host hotel, and a one-year complimentary membership with the Association.