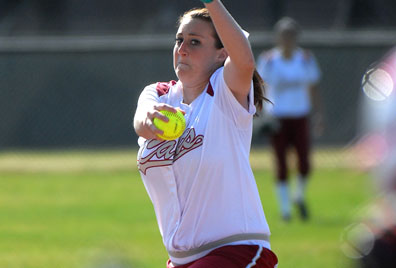 STARKVILLE, Miss. – Seniors Rachel Ruch of Georgian Court and Sam Baker of California State Chico have been named as the Louisville Slugger Division II National Player and Pitcher of the Week, respectively, for games played April 2-8.

Ruch went an astounding 15-for-20 last week over six games for the Lions with 14 RBIs, nine runs, six stolen bases, four doubles, two home runs, two walks and a triple. For the week, the senior hit .750, had an on-base percentage of .773 and a slugging percentage of 1.250.

The Edison, N.J., native played a key role in all six of Georgian Courts’ wins last week, but no performance was bigger than the first game of the week against Felician. In the contest, Ruch hit for the cycle and reached base safely in each of her four at bats.

Baker was 2-0 in three appearances last week and helped the Wildcats to two wins over conference-foe and 10th-ranked Cal State Dominguez Hills. She ended the week with no runs, just two hits. 14 strikeouts and one walk over 13.1 innings of work.

The native of Reno, Nevada came up big in the first game of the four-game series for Chico by tossing a perfect game. In the contest, Baker retired each of the 18 batters she faced, including 10 by way of strikeout. She went on to allow only two more hits over the next 7.1 innings to finish the week with a .048 opponent’s batting average

Baker is currently 13-5 on the year with a 1.90 ERA, 125 strikeouts and a .192 opponent’s batting average. She is now the second Wildcat to be honored by the Association this year, as teammate Hailey Stockman won Player of the Week honors on Feb. 29.

Other Top Performances
Allie Cranfill of West Texas A&M hit safely in five of her six at-bats last week with four of the hits going for extra bases, including three home runs… Valdosta State’s Alanna Hadley turned in three wins and a save last week with 21 strikeouts as the top-ranked Blazers extended their win-streak to 31… Kelsey Barak of Grand Canyon went 10-for-13 last week with 6 RBIs as the Antelopes took four from Dominican (CA)… Kentucky State’s Danielle Garay tossed two complete game shutouts last week and stuck out 13, while walking just two