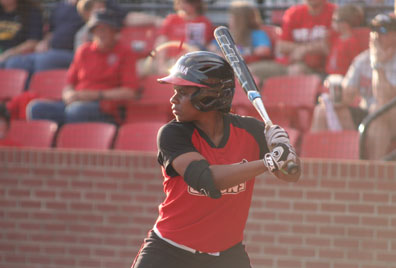 STARKVILLE, Miss. – Junior infielder Nerissa Myers of eighth-ranked Louisiana-Lafayette has been named as the Louisville Slugger Division I National Player of the Week for games played March 12-18.

The native of Petal, Miss., has played an integral role in the Cajuns’ hot start this year and last week was no different. In her team’s 9-2 win over fifth-ranked and defending national champion Arizona State on Thursday, Myers went 2-for-3 including a home run in the third that gave Louisiana-Lafayette an early 2-0 lead. On Friday against Fresno State, Myers smacked her second grand slam of the season and the seventh overall for the Cajuns in 2012.

Louisiana-Lafayette is still unbeaten on the year and is one of three Division I teams, along with No. 1 Alabama and No. 13 Louisville, with unblemished records. This week, the Ragin’ Cajuns will look to keep their winning ways alive when they host a double header with Georgia Tech on Thursday and then travel to Troy this weekend for a three-game Sun Belt Conference series.

Other Top Performances
USF’s Sara Nevins extended her scoreless streak to 60.2 innings last week as she struck out 47 and went 4-0 with a save… Amy Vaughan of Connecticut turned in a .529 clip last week, tallying 12 RBIs and seven runs off of nine hits, including five home runs over six games… California’s Jolene Henderson struck out 40 and allowed just three walks and two earned runs to finish the week at 2-1 with two saves… Jennifer Fenton of Alabama went 6-for-10 last week with seven runs and five stolen bases as the top-ranked and unbeaten Crimson Tide went 4-0… Rutgers’s Alyssa Landrith won three games and a save last week, including a win over then No. 21 Florida State, by allowing just two earned runs and limiting opponent’s to a .160 batting average.