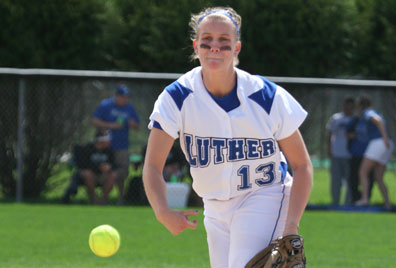 Luther pitcher Lexy Determan has been named the NFCA Division III National Player of the Week for games played March 21-27, the Association has announced. The senior helped the No. 4-ranked Norse to a perfect 6-0 week to bring their overall record to 13-1.

Determan went 5-0 on the week, completing all five games she started. She had four shutouts, giving up just one earned run in 35 innings of work while striking out 41.

She struck out 10-plus batters in two games during the week, including 12 in a 8-0, 6-inning win over Fontbonne. Determan gave up her first earned run of the season in a 4-1 victory over University of Chicago.

The Terril, Iowa, native was also named the Iowa Conference Pitcher of the Week.