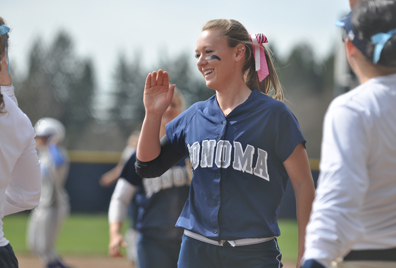 STARKVILLE, Miss. – Outfielder Jennessa Tesone of Metro State and Samantha Lipperd of Sonoma State have been named as the NFCA Division II National Player and Pitcher of the Week, respectively, for games played April 25-May 1, 2011.

Tesone helped the Roadrunners win their final regular-season series against Nebraska-Kearny last week and helped pilot Metro to a share of its third consecutive Rocky Mountain Athletic Conference regular-season title. For the week, Tesone was 11-for-16 with 11 runs, 12 RBIs, six home runs, a double and a walk. She ended the four-game set with a .688 batting average, a .706 on base percentage and a 1.875 slugging percentage.

The Longmont Colo., native registered at least two hits in each of the four contests last week and tied a school record in game two by blasting three home runs in one contest. However, no home run was as big as second of the day in the series finale when the RMAC’s all-time home run leader hit a three-run, game-winning bomb to help give the Roadrunners a share of the crown.

For the year, the senior currently leads her team with a .408 batting average, 13 doubles, a triple, 14 home runs and 49 RBIs. Metro State will enter this weekend’s RMAC Tournament with 33-14 overall record and a 28-11 record in league play. The top-seeded Roadrunners will open tournament play on Thursday with Colorado-Colorado Springs at Colorado Mines in Golden, Colo.

Lipperd earned her second national Player of the Week honor by helping lead the Seawolves to a perfect 3-0 record and the California Collegiate Athletic Association tournament championship. The sophomore, who received the win in all three games, ended the week with a 0.70 ERA and allowed just seven hits and 12 walks, while striking out 21 batters.

The Boulder Creek, Calif., native threw 20 of the Seawolves’ 21 innings on the week and during that span allowed just two earned runs. Lipperd capped her dominating performance on the week by tossing her second no-hitter of the season and the fourth of her career against then 8th-ranked UC San Diego in the championship game.

The CCAA Tournament MVP currently has a season record of 25-8 and an ERA of 1.10 to go along with 310 strikeouts, the fourth most in Division II. The Seawolves, who ended the year with a 36-20 overall record and a 23-13 clip in the conference, now await their seeding, opponent and location for one of two NCAA West Regionals next weekend.

Other Top Performances
Katie Goetzinger of Wayne State (NE) helped the Wildcats pick up three wins against ranked teams last week as she went 5-0 with 32 strikeouts.… Arkansas Tech’s Hayley Hudson went 8-for-12 with four home runs last week to help lead the Golden Suns to a four-game sweep of Christian Brothers and the Gulf South West Division crown… Elyssa Boris of Massachusetts-Lowell was 6-0 with a save for the River Hawks last week and allowed just two earned runs over 35.0 inning of work. Montana State-Billings’ Bobbie Lee batted .714 last week with six RBIs to end the regular-season on a 15-game hit streak.