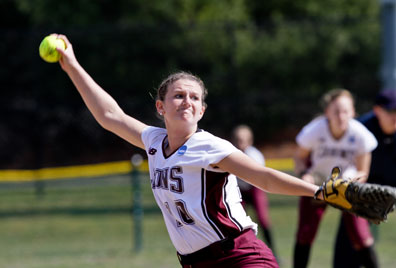 STARKVILLE, Miss. – Juniors Hayley Calderwood and Kelley Jansen of Molloy been named as the final Louisville Slugger Division II National Player and Pitcher of the Week, respectively, of the 2012 season for games played April 23-29.

The duo proved to be an invaluable part of the Lions’ three-game sweep of last weekend’s East Coast Conference tournament. This marks the second straight season in which Molloy has won the ECC title.

Calderwood batted 7-for-9 in the tournament with six RBIs, four runs, three home runs and two doubles. She ended the week with a .778 batting average, a .800 on-base percentage and a 2.111 slugging percentage.

The Lake Elsinore, Calif., native put the icing on the cake in the Lions’ semi-final win over Dowling on Saturday, when she crushed a solo home run over the centerfield wall to cap the score at 4-1. In Sunday’s championship game, she once again had the number of the Dowling pitching staff as she went yard twice and accounted for half of Molloy’s run production in the contest.

Calderwood is currently batting .365 heading into NCAA regionals to go along with 45 RBIs, 26 runs, 15 doubles and 12 home runs. Her 12 home runs on the year currently puts her at 50th in the nation in that category and makes her just one of 63 players in Division II to have at least that many long balls this season.

Jansen went 3-0 at the ECC tournament last week and allowed just one earned run on seven hits, while striking out 32, over 19.0 innings of work. She ended the week with a 0.37 ERA, an opponent’s batting average of .113 and an average of 11.8 strikeouts per seven innings.

The native of Long Beach, N.Y. pitched all 19 innings for the Lions last week and notched three 10-plus strikeout performances, two complete games and one shutout. In the championship game, Jansen allowed no runs on two hits while striking out 11.

Molloy earned the two seed in the week’s East regional and will travel to C.W. Post for the four-team event.   The Lions will open play in the regional on Friday at 3:30 p.m. ET with seventh-seeded Adelphi.

Other Top Performances
Courtney Albritton of Valdosta State was 13-for-20 last week with 11RBIs and five extra base hits as the top-ranked Blazers took home the GSC tournament crown… Arkansas-Monticello’s Kayla Jackson played a key role in the Cotton Blossoms run to the inaugural GAC tournament crown by going 4-0 and allowing only two earned runs over 24.0 innings… Julie Plante of Dominican (NY) went 9-for-13 with nine RBIs and three home runs as the Chargers won their third straight CACC tournament title… Incarnate Word’s Briana Sanchez helped the seventh-seeded Cardinals to their first-ever Lone Start tournament championship by going 2-0 with a save and 15 strikeouts.