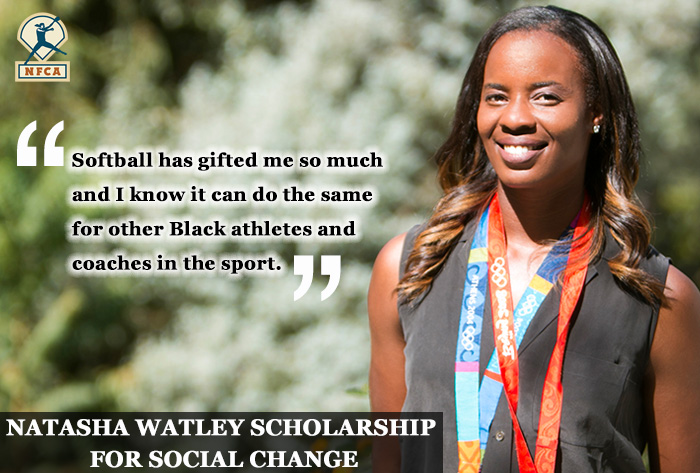 LOUISVILLE, Ky. – The NFCA is thrilled to unveil the Natasha Watley Scholarship for Social Change, presented in partnership with Sue Enquist. This brand-new educational scholarship will be awarded to a Black coach at any level and is open to NFCA members and non-members.

“As a Black woman in this sport I realize that we are hugely underrepresented,” Watley said. “Softball has gifted me so much and I know it can do the same for other Black athletes and coaches in the sport. Thank you NFCA and Sue Enquist for acknowledging underrepresentation and providing this opportunity to continue to level the playing field in our sport through the Natasha Watley Scholarship for Social Change.”

The scholarship is awarded to a Black coach who has created educational or athletic opportunities for their community, has removed and overcome obstacles through social change, or has opened doors for growing the game of fastpitch for Black girls or women. The scholarship is presented to an individual who embodies courage and commitment to break down barriers, create change within our sport, and has a need for financial assistance to attend the NFCA National Convention.

“As a Black woman in softball, Natasha Watley has broken down barriers throughout her life,” said NFCA Hall of Famer and former UCLA head coach Sue Enquist. “I’m grateful for her decades of impact as a UCLA Bruin, USA Olympian and community influencer. Thank you NFCA for this partnership in developing the Natasha Watley Scholarship for Social Change.”

“The NFCA is honored to announce the Natasha Watley Scholarship for Social Change,” said NFCA Executive Director Carol Bruggeman. “This scholarship will open new doors and provide life-changing opportunities. Natasha Watley is one of those special leaders who has made a big impact both on and off the field. We are also humbled by the generosity of NFCA Hall of Famer Sue Enquist; one of the best to ever coach the game.”

Recipients will receive a complimentary NFCA Convention registration, travel reimbursement up to $700, up to four nights paid at the Convention host hotel, and a one-year complimentary membership with the Association.