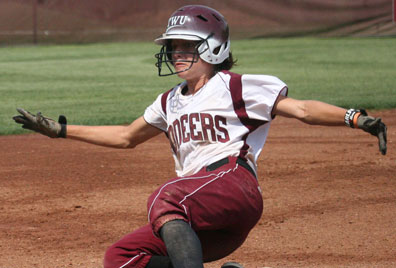 STARKVILLE, Miss. – The National Fastpitch Coaches Association announced on Tuesday the 10 student-athletes who are the recipients of the 2011 NFCA Golden Shoe award.

A committee comprised of head coaches in each of the 10 divisions determines the winner of their respective award. This year’s winners of the prestigious award are as follows:

NCAA Division I
Emily Allard, Northwestern University
Allard was nearly perfect on the base paths this season stealing 45 of 46 bases and averaging 1.05 stolen bases per contest. The junior from Antioch, Calif., led the Wildcat offense with a .491 batting average, the fourth highest in the nation. Allard, who was a second-team Louisville Slugger/NFCA All-Great Lakes Region honoree in 2011, also finished the season ranked 15th in the country in runs per game with 1.07.

NCAA Division II
Bailey Vrazel, Texas Woman’s University
Vrazel began her collegiate career in record setting-fashion by stealing 74 of 77 bases on the year and averaging 1.32 per game. The Danbury, Texas native’s 74 bases places her seventh on the all-time Division II single-season stolen bases, making her the fist new addition to the list since 2000 and only the second freshman to join the elite club. Vrazel earned a spot on this year’s Louisville Slugger/NFCA All-America first team by not only leading the nation in stolen bases, but by leading the Pioneers in batting average and on-base percentage as well at .427 and .488, respectively.

NCAA Division III
Stephanie Vanoudenhaegen, Pacific University (Ore.)
Vanoudenhaegen, a 2011 Louisville Slugger All-West Region first team selection, swiped 38 of 40 bases this season for an average of 0.95 per game. The senior from Cornelius, Ore., batted .429 over 40 games and led the team in on-base percentage at .510. Vanoudenhagen also finished eighth in the nation in runs per game on the year with 1.33 and 53 runs total.

NAIA
Jordan Reynolds, Olivet Nazarene University
Reynolds helped lead the Tigers to back-to-back Chicagoland Collegiate Athletic Conference championships this season by going a perfect 55-for-55 on the base paths. The senior short stop from Metamora, Ill., led her team with a .429 batting average on the year and also ranked first in the nation in assists. The 2011 Louisville Slugger/NFCA Second Team All-American also finished second in the nation with 83 runs scored and seventh in total hits with 87.

NJCAA Division I
Erica Wolver, Navarro College
Wolver, the only two-time honoree this season, claimed her second-consecutive award by stealing 86 of 88 bases. The sophomore from Corsicana once again led the nation in stolen bases, after swiping 84 during her freshman campaign. The 2011 Louisville Slugger/NFCA First-Team All-American helped lead the Bulldogs with a .467 batting average, 64 runs and 26 RBIs.

NJCAA Division II
Lacie Cook, Labette Community College
Cook helped lead the Cardinals to the Region VI title and a national tournament appearance this season by going 48-of-49 on the base paths. The Collinsville, Okla., sophomore hit .421 for Labette on the year, while also driving in 37 runs. Cook also finished ninth in the nation in her final season with the Cardinals in runs scored with 68.

NJCAA Division III
Chelsea Alston, Brookdale Community College
Alston led the nation in stolen bases this season by swiping 51 of 53 bases attempted for the Jersey Blues on the year. The 2011 Louisville Slugger/NFCA All-American turned in a .419 clip this season and scored 58 runs. Alston, a native of Matawan, N.J., ranked seventh in the nation in runs scored and her 72 hits placed her 10th nationally in that category as well

Cal JC
Jennifer Ringle, Solano Community College
Ringle capped off her sophomore season with the Falcons by leading the state in stolen bases with 52 in 53 attempts. The Rio Vista, Calif., earned 2011 Louisville Slugger/NFCA All-America honors in part by turning in the state’s second-highest batting average at .535. Ringle also finished fourth in runs scored with 54 this season and fourth in on-base percentage at .580

NWAACC
Becca Cable, Pierce College
Cable ended her career at Pierce by stealing 39 bases this season for the Raiders. The Tacoma, Wash., native also had an outstanding year at the plate by batting .550, the league’s fourth best average in 2011. Cable also finished the year in the top five in two other categories; coming in at second in hits with 71 and fourth in on-base percentage at .626.

High School
Jayda Carney, Baker High School (Ala.)
Carney finished her record-breaking junior year for the Hornets by stealing an Alabama High School Athletic Association record 106 bases in 112 attempts. The Mobile, Ala., native also set the state’s single-game stolen base record earlier this season by swiping nine bases against Blount. After just three seasons, Carney already ranks third in career stolen bases in the state and will need 84 next season to become the new all-time leader.