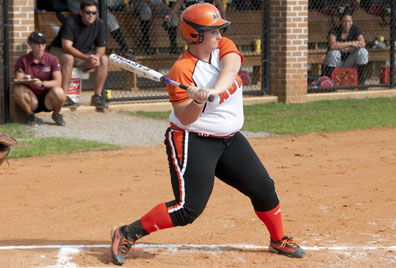 STARKVILLE, Miss. – This year 32 student-athletes from 15 different institutions have earned the distinguished honor of being named as a 2012 NFCA NAIA All-American.

This year’s list also included five student-athletes that earned the title of All-American for the second time in their respective careers and one earning her third-straight honor.

Leading off the three first-teamers for Oklahoma City was pitcher Lilly LaVelle. LaVelle, also a first-team honoree in 2011, went 43-7 this season with seven saves, a 0.92 ERA and a nation-leading 540 strikeouts. At the plate, LaVelle was equally as impressive, turning in a .435 clip on the year to go along with 22 home runs and 73 RBIs, both team-highs. Joining LaVelle on the first team was battery-mate Kylee Rounsaville and first baseman LeeAnn Lopez, who was an at-large honoree. Rounsaville batted .384 with 50 RBIs, while Lopez hit .399 with 19 home runs and 20 doubles.

Fresh off their national championship win, the two selections from Shorter were outfielder Charlsie Broome and utility player Jackie Castaneda. Broome finished fifth in the nation in hits this season with 94 to go along with a .433 average, while Castaneda led the Hawks with a .444 average and the eighth most runs in the country at 68.

William Carey also had two selections this season in the persons of pitcher Alyssa Boutwell and outfielder Hannah Cook-Kelley. Boutwell went 29-6 this season and limited opponents to a .211 batting average. Cook-Kelley hit .407 on the year with 35 runs, while also driving in an additional 54.

The number one defensive team in the nation, with a .978 team fielding percentage, this season was Olivet Nazarene and they also had two first-teamers, second baseman Hanna Gardner and shortstop Jordan Reynolds, an at-large choice. Gardner powered her team with a .429 average, a .818 slugging percentage and the nations most RBIs with 80, while Reynolds, now a three-time All-American, led the nation in hits (101), runs (90) and stolen bases (55).

Central Baptist outfielder Kiara Bonner became a two-time first-team honoree this year, while the Mustang’s third baseman Erica Gunter earned her first All-American award. Bonner scored 78 runs, drove in 55 more and knocked 17 home runs, while Gunter posted the highest batting average in the land at .502, to go along with 81 runs and 68 RBIs.

Concordia (Calif.) also had two selections this season, shortstop Amanda Fama and pitcher Katie Cotta, who was an at-large choice. Fama hit .453 with 71 RBIs and 24 walks, while Cotta went 20-1 from the circle with a 1.02 ERA and the nation’s lowest opponent’s batting average at .130.

Rounding out the schools with multiple first-team selections this season was Auburn-Montgomery, who were represented by designated player Shea Driggers and at-large pitcher Brandi Richards. Driggers hit .317 this season with 30 RBIs, while Richards went 16-9, striking out 250 batters and limiting opponents to a .157 average.

The final 2012 NFCA NAIA First-Team All-American was first baseman Alyssa Dronenburg of Cal State-San Marcos. Dronenburg, a 2011 second-team choice, finished her 2012 campaign with the Cougars with 24 home runs, the second most in the nation, and the country’s third-highest slugging percentage at .958