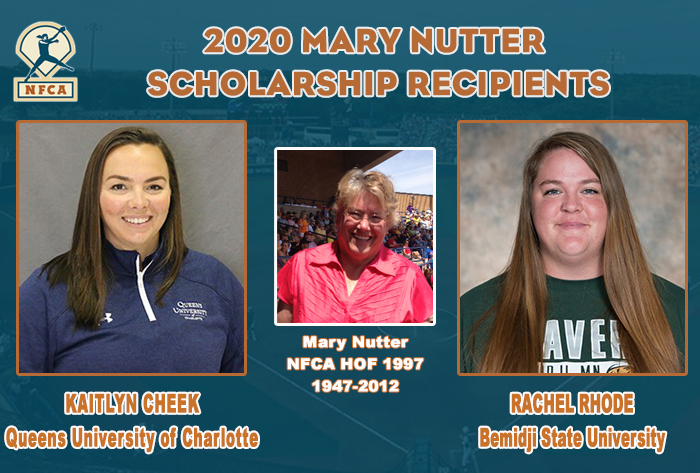 The Mary Nutter Scholarship is an educational grant named for the former Pittsburg State (Kan.) head coach and 1997 NFCA Hall of Fame inductee who founded the National Sports Clinics. It seeks to continue Nutter’s effort to provide softball coaches at all levels access to the best minds in the sport to help them become better coaches themselves. The recipients are voted on by the NFCA's Awards Committee.

Cheek returned to her alma mater as an assistant coach for the 2020 season. A four-year standout for the Royals, Cheek also served as an assistant coach at College of the Holy Cross, North Stanly High School (N.C.) and Pfeiffer University. Prior to joining Queens, she was a softball instructor at Ascend Sports and served as the head coach for the Carolina Elite Fastpitch 18U team.

“Queens only has one full-time assistant coach, therefore, this scholarship would show Kaitlin (MK) that she is appreciated and valued, provide her with tremendous professional development, and positively impact our team and players upon her return (from furlough) in January,” said Queens head coach Stacey Schramm. “MK has already implemented concepts that we learned at the last Convention, and I know that providing her this scholarship, her value will skyrocket.”

Rhode joined the Bemidji State softball program for the 2020 campaign, following two years as a graduate assistant and student assistant coach at Union College. In her first season with the Beavers, two players under her guidance ranked second amongst Northern Sun Intercollegiate Conference players in RBI and runs scored. She played a part in helping the Union Bulldogs finish 2019 with 31 wins, just the third time the program eclipsed the 30-win mark. With a focus on pitchers, Union ranked fourth in the conference in strikeouts and one hurler earned all-conference recognition.

“Coaching and mentoring young female athletes is something I strive to do for the rest of my career,” said Rhode. “Last year at the Convention, the mentoring session changed how I view coaching in some aspects. I was able to listen to Tim Walton’s intake on drills, life and situations that were invaluable to me as a young coach still learning the game. To connect with coaches is important and can help shape me into the great coach I hope to become someday.”

ABOUT NUTTER
Nutter, who passed away in July 2012, compiled a 204-125 record over eight years at Pittsburg State University. She got her start in coaching with three years as a graduate assistant at Michigan State, after seven years as a teacher in nearby Elsie, Mich.

In 1981, Nutter won the first of three NAIA District 10 titles and the first of her three District 10 Coach of the Year honors (1981, 1982, 1985). That 1981 squad finished fourth at the NAIA national championship and she served as an assistant coach for the 1983 Pan American Tri-Nationals team and was a member of the 1984 U.S. Pan American selection committee. Nutter was a 1988 inductee into the NAIA Hall of Fame.

As a player, Nutter was a two-time first-team All-American (1974-75) for the Lansing Laurels, an ASA Women’s Major fastpitch team and spent 1976 as player-coach for the Michigan Travelers of the Women’s Professional Softball League.