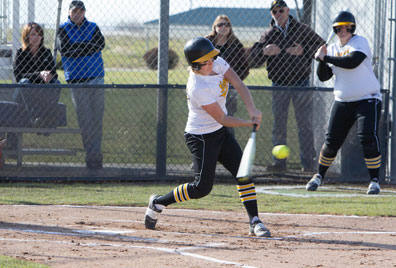 STARKVILLE, Miss. – Third-ranked Walla Walla had three selections to lead all schools as the NFCA announced its 2012 NFCA NWAACC All-American team on Friday. Additionally, the coaches at Southwestern Oregon were named as the 2012 NFCA NWAACC Coaching Staff of the Year.

The first of three Walla Walla honorees this season was infielder Jill McDaniels. McDaniels batted .453 for the Warriors with league-highs of 66 RBIs and 17 home runs. Joining McDaniels as an All-American were teammates outfielder Brandy Knowles and the only two-time All-American this season, utility player Dara Kosanke. Knowles finished fourth in the race for the league batting title with a.485 average while also tallying 17 doubles and 25 RBIs. Kosanke tuned in a .527 clip at the plate this season, the second best in the league, to go along with a league-leading 28 wins and 167 strikeouts from inside the circle.

Top-ranked Wenatchee Valley had two selections this season, pitcher Hailey Bator and infielder Ashley Van Horne. Bator went 22-2 this year with a 1.58 ERA and 203 strikeouts, while Van Horne turned in a team-high 43 RBIs and batted .419.

The two honorees for Southwestern Oregon this season were pitcher Alexandria Molina and outfielder Jayme Simonis. Molina led the league in both ERA and strikeouts at 1.29 and 269, respectively, while Simonis hit .455 with 34 runs, 50 hits and 15 walks.

Clackamas also had two players selected to this year’s All-America team, infielder Megan Malvick and utility player McKenzie Marshall. Malvick tallied 13 extra base hits, 14 walks and 35 RBIs for the Cougars, while Marshall went 19-3 with a 1.52 ERA as a pitcher and still managed to drive in 48 runs from the other side of the plate.

The last team with multiple honorees this season was Bellevue. Earning honors for the Bulldogs were infielder Haylee Baker and outfielder Autumn Isaacson. Baker knocked in 46 runs off of a team-high 11 home runs, while Issacson hit .483 and stole a league-high 57 bases.

Rounding out the 2012 NFCA NWAACC All-American team was Treasure Valley’s Jarica Martarano. Martarano, the lone Chukar on this year’s team, led her team with a .459 batting average, while walking 17 times and driving in 36 runs.

All six teams to earn All-America honors this season will now compete in this weekend’s NWAACC Championship Tournament, which runs through Monday at Delta Park in Portland, Ore.

Head coach Megan Corriea and assistants Emily Matekel, Mark Hubbard and Jeri Young earned Coaching Staff of the Year honors by leading the Lakers to a 34-5 overall record and an 18-2 clip in the South Region. Southwestern Oregon won the South Region regular-season title and is currently on a 13 game win-streak. The Lakers will enter this weekend’s NWAACC tournament as the No. 3 overall seed.