2021 NFCA Board of Directors announced 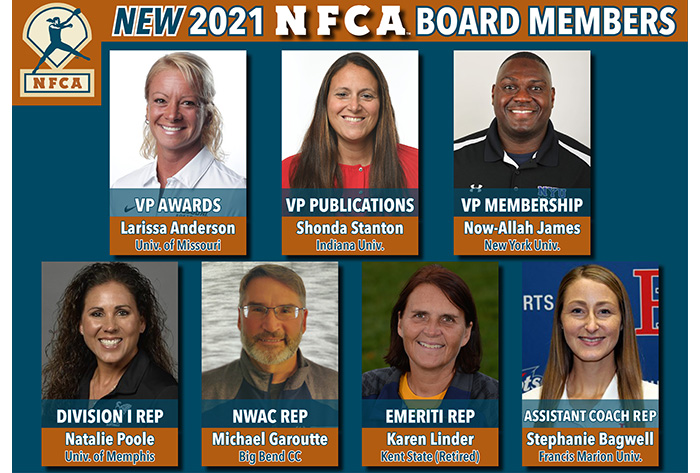 LOUISVILLE, Ky. – The NFCA has announced seven new members to the Association’s Board of Directors who will officially begin their three-year tenures January 1, 2021. Board members are elected by the membership. Additionally, the NFCA announced its new committee members for 2021.

In September, New York University head coach Now-Allah James replaced Todd Buckingham as the Vice President for Membership. James will finish out the final year of the term and be eligible to run for the position in the 2021 election. Buckingham vacated the role created for a non-Division I coach following his hiring at a Division I institution.

Now-Allah James has been at the helm of the New York University softball team since its debut as a varsity program in 2014-15. Over his first six seasons, James’ teams have posted a 101-96 overall record. He steered the Violets to the ECAC Division III Metro Championship in 2016, which was also the same season NYU earned its first University Athletic Association (UAA) victory. Under his guidance, 17 players have garnered UAA honors, while four have taken home NFCA All-Region accolades.

Larissa Anderson enters year three as Missouri’s head coach. She has led Mizzou to a 54-32 record in her year and a half tenure, and owns a career record of 184-105-1 as a head coach. Anderson finished her first year with a 35-25 record and 12 wins in Southeastern Conference play, earning the Tigers a fourth-place finish. Additionally, she guided the Tigers to the if-necessary game of the NCAA Regional final against eventual national champion UCLA.

Stanton, who begins her fourth year in 2021, has made an immediate impact on the Indiana softball program. In her first season, Stanton guided the Hoosiers to a third-place Big Ten finish and 17 league wins, the most since 2011. Additionally, IU reached the semifinals of the Big Ten Tournament for the first time since 2006. In 2019, she steered Indiana to its best start (14-0) in program history and a 36-21 mark (most victories since 2001), while the Hoosiers set a school record with 141 stolen bases. Stanton previously served on the NFCA Division I All-America Committee.

Stephanie Bagwell will start her third season as an assistant coach with Francis Marion in 2021. The Patriots posted a 31-win campaign in her first season and was off to a 24-3 start in the shortened 2020 season. She came to FMU from Northwest Missouri State, where she spent two seasons as a graduate assistant coach for the Bearcat softball program. During her two seasons, the Bearcats compiled a 56-40 mark and boasted 12 Mid-America Athletic Association All-Conference selections and the program’s first NFCA first-team All-American. Bagwell is a member on the NFCA’s Hall of Fame Committee.

Collegiate and prep softball coaching veteran Michael Garoutte joined Big Bend in 2018 and enters his fourth season in charge of the Vikings. Prior to Big Bend, Garoutte steered Wenatchee Valley Community College to a NWAC Tournament title in 2017. With over 20 years of coaching experience, Garoutte has made head-coaching stops at Kalamazoo College (NCAA DIII) and Yuma High School, while serving two different stints at Central Washington University (associate head and assistant coach) and assistant coach at Eastern Oregon University. He was a member of the U.S. Navy All-Navy Fastpitch Softball Team from 1988 to 1991.

Prior to Kent State, Linder led Ashland University (NCAA II) to 253 triumphs and a pair of conference titles and spent three seasons as Union College’s (Ky.) head coach. During her time as an active head coach, Linder served on the NFCA’s Division I Head Coaches, All-America and Poll Committees. Currently, Linder runs Aspire Higher Sports, which focuses on helping athletes grow mentally and physically while focusing on a winning team mentality. Additionally, she provides lessons and is involved in clinics and All-American Games (12U) for USA Softball in Ohio.

Natalie Poole starts her ninth season at the helm of the University of Memphis softball program and 19th year overall as a head coach. In her head coaching tenure, she has compiled 512 wins and guided two teams to the NCAA Regionals. During her eight years, Poole has mentored 18 all-conference selections, 67 NFCA All-America Scholar-Athletes and 92 all-academic members.

In addition to the Board of Directors, the NFCA is announcing new committee members for 2021. Due to the cancellation of 2020 NFCA All-America awards, committee members received an additional year of service to their terms. New in 2021, NJCAA Division I and II will have six representatives, adding one member to each of their three regions.