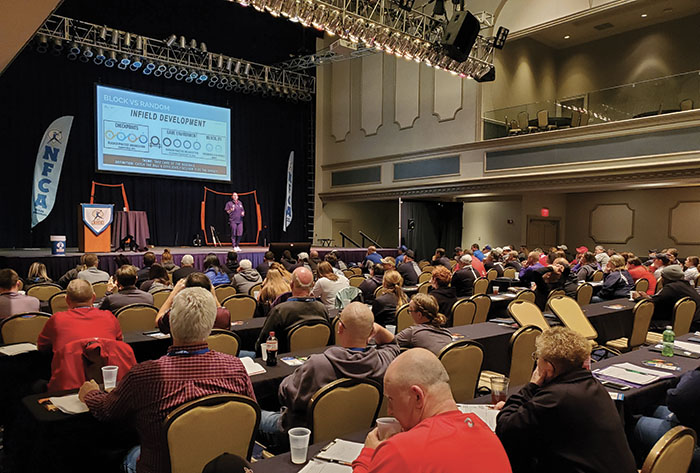 LOUISVILLE, Ky. — The NFCA Coaches Clinics continued its popularity this winter at eight regional sites around the United States.

Right out of the gate in December, a record 522 attendees descended on the Crowne Plaza Chicago O’Hare for the first of the eight 2019-20 NFCA Coaches Clinics, easily surpassing the previous mark of 486, set in 2019 in Kansas City. The star-studded speaking lineup of Notre Dame’s Deanna Gumpf, Michigan’s Carol Hutchins, UCLA’s Kelly Inouye-Perez, Kentucky’s Rachel Lawson and LSU’s Beth Torina played a big part in Chicago I’s success, as they shared their vast knowledge on topics ranging from pitching and offense to baserunning, team culture, practice planning and recruiting. Including the Chicagoland area, coaches traveled from all over the U.S., spanning 30 states, from Massachusetts to California, plus Canada, to learn from some of the best minds in softball.

All eight NFCA Coaches Clinics provide a small taste of what it’s like to attend the week-long NFCA National Convention and help get coaches excited for the spring season with first-class instruction and ideas that attendees can immediately use with their teams. The two-day events also offer attendees an opportunity to network with fellow coaches and check out exhibitors showing off the latest products and services for softball teams.

"Our Coaches Clinics have quickly become 'must-attend' events!” NFCA Executive Director Carol Bruggeman said. “There is excitement every minute with high-quality speakers, an innovative exhibit show, equipment giveaways, a festive social hour, and eager-to-learn attendees. Everyone leaves the clinics motivated to incorporate new information learned at our clinics. Additionally, networking opportunities are off the charts.”

“Most important, our overall membership number continues to increase, which allows the NFCA to assist coaches not only at a two-day clinic, but all year long."

Total attendance for the series of clinics topped 2,500 for the second time in three years since the NFCA’s 2017 acquisition of the seven National Softball Coaches Clinics founded by NFCA Hall of Famer Mary Nutter and her longtime business partner Traci Mayberry, a staple of softball instruction for three decades, joining the NFCA’s existing Louisville clinic in its educational lineup.

All eight locations followed the same schedule format, with the topics tailored to the speakers presenting at each particular location. All sites featured a Q&A session with the speakers and a social hour presented by Legacy Event Management on Friday, and then closed Saturday’s session by sending selected attendees home with the softball equipment used on stage during the two days, including a Bownet Bodyguard Net, ProMag Tee, Bownet Big Mouth X Net, Blast Motion Sensor and a Pocket Radar Smart Coach at each clinic location. A special thanks to NFCA Coaches Clinics partners, Bownet and Blast.

Additional attendee prize giveaways were conducted both days during breaks between speakers, including a contest just for member coaches at each of the eight locations to win a free Coaches Clinic registration for that site next year.

Clinics are open to everyone and those who sign up early can take advantage of discounted pricing. Additionally, those who join the NFCA at a Coaches Clinic receive 50 percent off their first year of membership. This year, 299 attendees took advantage of the discount and signed up for NFCA membership, which pushed the NFCA’s overall membership to the verge of 5,900 for the first time.

Collections this year at the eight locations raised a combined $1,900 to support the NFCA’s Mary Nutter Scholarship, which provides funding to allow selected member coaches to attend the NFCA National Convention each year.

It’s not too soon to start marking your calendars for the 2020-21 NFCA Coaches Clinics, which kick off in Chicago on Dec. 4-5. A second Chicago clinic will be held the same weekend as the Charlotte clinic on Jan. 15-16, 2021, while other clinics are in Louisville and Nashville on Jan. 8-9, Minneapolis and Portland on Jan. 22-23, and Kansas City on Jan. 29-30. More details and registration will be available later this year at NFCA.org and NFCAevents.org.