Four days of energy and electricity at 2019 NFCA Convention 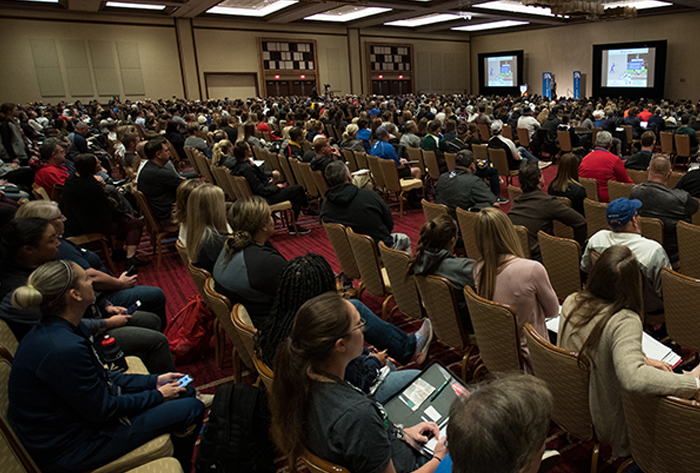 ATLANTIC CITY, N.J. – An engaging keynote address, stellar speaking lineup, largest Exhibit Show in softball history and memorable Hall of Fame speeches were just a few of many highlights that made the 2019 NFCA National Convention another success.

The Exhibit Show sold out for a fourth straight year (136 vendors) and once again the Rookie Orientation presented by Triple Crown Sports was filled to capacity, welcoming newcomers and acclimating them to their first Convention.

"The overall 'feeling' or 'vibe' surrounding Convention was electric and energetic,” said NFCA Executive Director Carol Bruggeman. “There are many opportunities for professional development at the 'Greatest Softball Show on Earth' and our attendees took full advantage by packing the house at all the educational, networking, business, and celebratory events.  You can't leave Convention without feeling a bounce in your step and a rejuvenation for the spring season!"

Keynote speaker Justin Patton kept the attendees engaged during his hour-long presentation. His high-energy and positivity was absorbed by the audience as he put them through several interactive and captivating exercises, including bringing a group of coaches up on stage for an exercise in confidence, self-awareness and body language.

Education was brought to the Exhibit Hall for the first time this year, which allowed companies to showcase their products with demonstrations in a batting cage. From the crowds that gathered around the cage on Thursday and Friday, it was an instant success. On top of that, the digital silent auction, which coincides with the Exhibit Show, was a success in its second year, as it drove attendees to company’s booths to scan QR codes and meet with those company’s representatives.

Member caucuses on Thursday and Friday allowed coaches to meet and discuss the important issues in their respective divisions. Each division’s “hot topics” were brought forward during the Softball Summit presented by USA Softball. Topics, such as the new pitching rule and the recruiting calendar, were brought to the floor and a healthy debate ensued. Additionally, USA Softball Executive Director Craig Cress recognized the 2019 USA Softball Player of the Year Haylie McCleney and gave a recap and preview of the program, including finalized renovations of USA Softball Hall of Fame Stadium and the upcoming 2020 Olympics in Tokyo.

Member coaches can find recaps of their respective caucuses in their coach’s boxes by the end of the year.

"The NFCA is a leader in how to run a National Convention,” said NFCA Hall of Famer and Central College head coach George Wares. “All divisions well represented and treated with equality and great respect."

The Convention featured numerous ways to get better, no matter what level you coach. Both Drills, Drills, Drills sessions and the four Chalk Talks were attendee favorites. This year’s Grassroots Summit presented by Wilson was specifically for high school and travel ball coaches and featured a panel of collegiate head coaches as well as special presentations by the Villanova coaching staff.

Major League Baseball instructor Kainoa Correa was also the talk of the town as his “Own the Dirt: Infield Defense” presentation had every coach glued to their seats or feet planted to the floor in a jam-packed room. It was so highly received that some coaches moved over to the Summit to catch his second presentation of the day as he tailored a session to our grassroots coaches as well.

The week’s most highly-anticipated event is the annual Mentoring Session, which allows coaches to gain valuable knowledge from their peers, along with paying it forward by raising money that goes directly back into the membership.

Emceed by Indiana head coach Shonda Stanton, the Mentoring Session opened with a touching address by Pfeiffer’s Vada Blue Sherrill, the first recipient of the Geri Ann Glasco Memorial Scholarship. Stanton brought her high-energy and entertaining personality, as mentors volunteered to give advice and life lessons to young head and assistant coaches.

Additionally, mentors were asked to “pay it forward,” donating money toward great prizes and educational opportunities for the mentees, which included 2020 Convention, NFCC and NFCA Coaches Clinic registrations as well as regional and national coaching staff campus visits. This year featured several fund-raising activities, highlighted by a dance off between NFCA Hall of Famers Michigan’s Carol Hutchins and Alabama’s Pat Murphy.

The Convention’s educational programming was once again sponsored by Sports Attack, along with its Junior Hack Attack raffle inside the Exhibit Hall.

Diamond and PGF hosted a still-talked-about Pool Party at Harrah’s Pool After Dark, while long-time supporter Schutt Sports sponsored breakfast. Scrap Yard Sports offered a happy hour and gave away prizes during Exhibit Hall hours, and HitTrax brought back its Home Run Derby with the Pros for a second straight year. Traveling Teams provided the lanyards and credentials worn by attendees all week.

“It was my first NFCA National Convention and let me tell you ... I was blown away,” said Dan Rattacasa. “The efforts of the organization to put together a once in a lifetime softball experience is truly appreciated.”