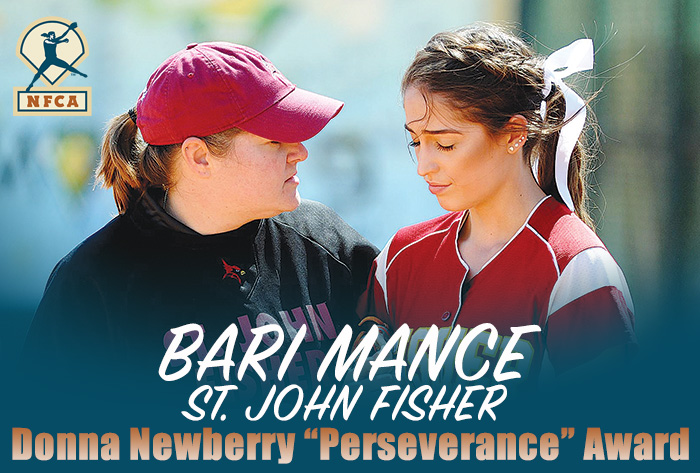 LOUISVILLE, Ky. — The NFCA is pleased to announce that St. John Fisher College head coach Bari Mance is the 2019 recipient of the Association’s Donna Newberry “Perseverance” Award, which recognizes an NFCA member coach who has demonstrated extraordinary strength of will and character in the fight to overcome a physical, mental, or social adversity that presented an additional challenge to the already demanding job of a coach.

Mance, who was diagnosed with breast cancer in August 2017, continued to run practices, coach games and recruit while undergoing chemotherapy, surgery and radiation treatment. She even managed to fly cross country from upstate New York to Las Vegas for the 2017 NFCA Convention.

Despite everything going on personally, she never missed a game during the 2018 season, as the top-10 ranked Cardinals went 35-10 and advanced deep into the NCAA tournament. A loss to fellow powerhouse Ithaca in the Super Regionals denied St. John Fisher a third-straight appearance in the NCAA Division III Championship, where the team finished tied for third in 2016 and was national runner-up in 2017.

Mance made sure her treatment and associated health issues never compromised the Cardinals’ success on the field, as they’ve won 70 percent of their games, going 62-27, since she was diagnosed. St. John Fisher has won the Empire 8 tournament title and played in the NCAA tournament both seasons since.

“It’s truly an honor to be awarded the Donna Newberry “Perseverance” Award,” Mance said. “The last few years, while difficult, were accomplished because of the amazing support from my family, friends, colleagues, peers and my team. Their support was beyond humbling, and I’m blessed because of it. This was an unexpected experience, not one I’d want to repeat, but I wouldn’t have changed a thing.”

“I feel every coach goes through struggles beyond the demands of coaching, and I handled cancer and everything that goes with it the only way I knew how, and that was to look forward, stay positive, and laugh often.”

Among that army of supporters, were her trio of nominators for the honor — Clarkson University head coach Kristen McGaughey, Robert Morris assistant Sara Pelegreen, and NFCA Hall of Famer Julie Lenhart, who recently retired as the longtime head coach at SUNY Cortland.

“I actually had the honor of knowing Donna Newbury while she was alive,” McGaughey said. “I witnessed firsthand her strength and determination to continue coaching the game she was so passionate about all while battling for her life. It has also been my honor to know Bari Mance and watch her battle breast cancer with the same energy and positivity she lives life.”

“That is an unexpected and scary thing for a woman in her 30s. In true Bari fashion, she faced it head-on and leaned on her vast support group of colleagues, family and the St. John Fisher softball network. She wasn’t going to let her illness stand in the way of her life or her career. She flew with a medical mask to protect her weakened immune system, and was not feeling well, but she didn’t miss a session while at Convention.”

“Perhaps the most impressive thing is that Bari didn’t miss a game in the 2018 season,” McGaughey continued. “Despite going through chemo and treatment, Bari fought through the fatigue and nausea to be there with her team. She knew they could have a tremendous year and didn’t want cancer to get in the way of that.”

She said Mance’s perseverance was beyond comprehension.

“As coaches, we all have our difficulties during season, but I can’t imagine balancing the expectations of a championship with the battle for my life,” McGaughey said. “We talk about perspective a lot with our athletes and being conscious of what’s important. We teach them about events and reactions and how we can only control one of the two, and here I was getting a real-life lesson from a good friend. It definitely helped me keep my problems in perspective and appreciate the ups and downs of a season.”

Mance found creative ways to get around, despite not being able to drive, sharing rides and even pressing her parents into service when needed to get to recruiting tournaments. She has continued to have an upbeat attitude and press forward. If you came into contact with her and didn’t know her, you might not even know anything was wrong.

“The hardest part for her was trying to understand that she wasn't going to be able to do everything she wanted to,” Pelegreen offered, “but what she could do was give the best of what she had to her players, whether it was through love or just merely showing up on the hardest of days.”

“Servant leadership is one of the purest forms of leadership, and I think Bari embodies the loving, serving and caring characteristics to allow both her and her team triumph. Bari does not back down through adversity, and she helps other coaches (like me) see a different perspective and become better from it. “

“Bari Mance is a perfect candidate for this award,” she said. “She had a double mastectomy, radiation, chemo with total hair loss and only missed one day of practice throughout that entire torturous first year,” she said. “I know she leaned on her coaching staff when exhaustion hit, but she never quit. She constantly led the way for her team and is a winner on and off the field.”

“She immediately began to share her journey as she educated her team, friends and the entire coaching community through her frequent updates on Facebook. She wanted to make sure all of the people she could communicate with became familiar with the need to do breast exams and speak up if something wasn't right. She openly talked about her cancer and took every chance she could to educate.”

“I knew Donna personally and coached against her for many years,” Lenhart said. “She, like Donna, refused to let cancer control her life. You never knew when she was having a bad day.”

Just when she finally got a clean bill of health for her cancer last fall, Mance was saddled with a few new health issues, which forced her to miss some games this past spring. Then this summer, she was hospitalized for a virus that presents itself like meningitis.

Last week, in the middle of breast cancer awareness month, Mance’s oncologist told her he wouldn’t need to see her again until April, and his assistant didn’t recognize her with her hair grown back. That made her smile, just as she has managed to do throughout this terrible, unimaginable ordeal.

Mance will be recognized at the Awards Brunch on Dec. 7, the final day of the NFCA National Convention at Harrah’s Atlantic City.

ABOUT NEWBERRY
Newberry, the all-time winningest coach in the history of NCAA Division III softball when she passed away in November 2010, spent 36 seasons with Muskingum College athletics. During that time, she transitioned the Muskies from a slowpitch team to a perennial national fastpitch contender in Division III.

Newberry demonstrated her perseverance as she coached what would be her final season in the spring of 2010. While undergoing chemotherapy treatments during her third bout with breast cancer, she led the Lady Muskies to the Ohio Athletic Conference tournament for the 25th consecutive time.

In the months before her death, Muskingum dedicated its softball field in her honor, renaming it the Donna J. Newberry Softball Field. In addition, Newberry finished a book about her coaching career and experiences — "You Must Play to Win: A Coach's Journey from the Pit to the Pinnacle.”