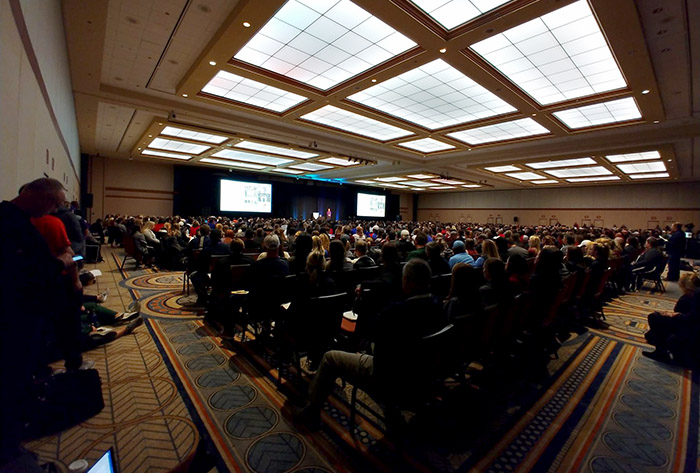 CHICAGO - A sold-out exhibit show, highly-attended fireside chats and mentoring session were just some of the highlights on day two of the 2018 NFCA National Convention at Sheraton Grand Chicago.

Jen Williams (Dartmouth) and Cassie Moore (Bethany College) kicked off the day with an early morning Windy City Workout and 7th Inning Stretch yoga session, respectively, followed by the Schutt Sport Breakfast. After getting the blood pumping and fueling up with hearty breakfast, the membership groups met for business at their respective caucuses.

The day also featured the opening of the sold-out (third year in-a-row) exhibit hall, featuring over 100 companies. It allowed members to mingle with vendors and learn about the latest in equipment, apparel and innovative products. The final hour was capped off with the Scrap Yard Sports Happy Hour and exhibit hall raffle. In addition, the brand-new digital auction kicked off. It allowed attendees to bid from their phone, while also driving traffic to the hall and vendor booths to scan individualized QR codes.

Following the mentoring session, the conversations continued in a laid-back setting at the “Fireside Chats,” where Missouri’s Chris Malveax and Purdue’s Boo De Oliveira led sessions on hitting and pitching, respectively, along with a work-life balance discussion facilitated by NFCA Legal Counsel Samantha Ekstrand and NFCA Director of Education Joanna Lane. In addition, there was an opportunity to take part in a panel discussion- Coaching Today’s Athlete- led by Dana Jenkins of the Fellowship of Christian Athletes (FCA).

The night capped off with the Diamond/PGF social off-site at Pinstripes, which included members mingling over as bowling, bocce ball, giant Jenga and cornhole, while mingling with their peers.

Friday features a full boat of speakers starting at 9:00 a.m., The lineup also includes the Softball Summit sponsored by USA Softball, Grassroots Summit, the Sports Attack Raffle in the exhibit hall, which is open from 9 a.m. to 3 p.m. The night is capped off by the convention’s marquee event, the 2018 Hall of Fame banquet, followed by the Legacy Event Management Reception.