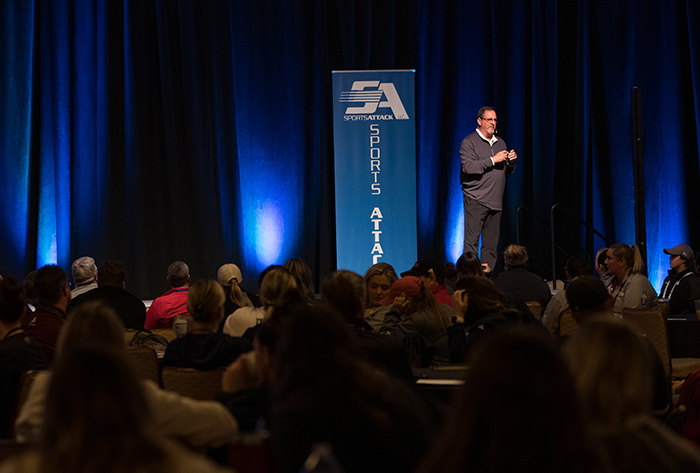 LOUISVILLE, Ky. – The NFCA is excited to announce that Sports Attack has renewed as an Official Sponsor. Signing a multi-year deal, Sports Attack, which was a longtime NFCA Convention Sponsor, will continue to have a strong commitment at the Association’s largest gathering of softball coaches and exhibitors in the country, while expanding its presence year round.

"We are thrilled Sports Attack has renewed a multi-year official sponsor contract with the NFCA,” said NFCA Executive Director Carol Bruggeman. “They are a first-class company who is very invested in the sport of softball. Sports Attack continues to develop cutting-edge pitching machines to enhance skill development for student-athletes and practice opportunities for coaches. They have a huge presence at our annual Convention, in sponsoring our educational clinic and raffling off one of their top-notch pitching machines in the Exhibit Hall. We look forward to working with Sports Attack to continue to grow the game."

Sports Attack, an innovative professional sports manufacturing and design company, remains the title sponsor on all the Convention’s educational programming. Attendees will find Sports Attack’s signage on stage during speaker sessions and also within their booth space. A crowd gathers annually with the Junior Hack Attack pitching machine on display, which is raffled off to a coach in attendance and shipped to their door.

"Sports Attack has tremendous respect for the NFCA and has witnessed first-hand its considerable growth and professionalism over the last three years," said Sports Attack President Amanda Pratt. "We are proud to continue our sponsorship of this forward-thinking organization and to provide this sport with the best pitching machines on the market."

Sports Attack manufactures professional sports training equipment for baseball, softball, football, volleyball, tennis, soccer, rugby and cricket. Its softball line was designed by former softball players and coaches who were determined to meet player needs. It is their mission to be the leader in innovative, quality sports training equipment that will enable athletes at all levels to reach their full potential and coaches to develop championship teams.