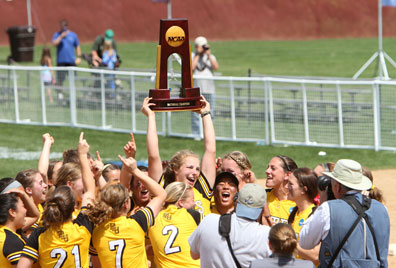 SALEM, Va. - It was Stacey Hagensen's moment to shine, and the senior pitcher who had carried Pacific Lutheran to the NCAA Division III Softball Championship title game on Monday afternoon shone as bright as the sun in the Virginia sky.

Hagensen, named the tournament's Most Oustanding Player, shut out the high-powered Linfield offense for the second time this season, limiting the Wildcats to just three hits as Pacific Lutheran won its first-ever NCAA Division III softball championship with a 3-0 win at Moyer Complex.

The Lutes, who won six of the nine games played between these Northwest Conference rivals and powerhouses, finished the season with a 45-11 record. Linfield, which came up short of defending its 2011 national title, ended up 46-7. Of Linfield's seven losses, six came at the hands of the upstart Lutes, who came to Salem to make a statement after not being given an at-large bid to the 2011 tournament despite an outstanding 31-13 record.

Hagensen rarely found herself in trouble, limiting the 'Cats to just three baserunners in the seven innings. Linfield got a runner as far as second base in the first inning, another to third in the second, and the final one to second in the sixth inning. Each time, Hagensen ended the threat to keep Linfield off of the scoreboard.

The PLU offense gave Hagensen the only run she would need in the bottom of the first inning. Montessa Califano, an all-tournament pick, led off with a walk and and went to second on Glenelle Nitta's sacrifice fly, but Califano ran into an out on Hagensen's ground ball to Linfield shortstop Katy Brosig.

That brought to the plate Kaaren Hatlen, PLU's first team All-America designated player who to this point in the tournament didn't have a hit. With Hagensen on second base following a wild pitch, Hatlen ripped a double to the fence in right field, scoring Hagensen and staking PLU to a 1-0 advantage.

The Lutes played add on in the fourth, scoring a run on two hits to make it 2-0. Hatlen led off with a single and was replaced on the base paths by Spencer Sherwin, who stole second. Amanda Hall, named to the all-tournament team, collected her fifth RBI in four games with a single to right centerfield.

The final run came in the fifth inning when Amanda Goings and Califano led off with consecutive singles. Both runners moved up a base on a wild pitch, but Nitta's line drive was snared on an outstanding diving catch by Linfield's Jaydee Baxter. Goings was unable to tag up on the play, but she scored moments later on Hagensen's fielder's choice ground ball.

While the offense was producing that trio of one-run innings, Hagensen and her defense were dealing. Sherwin came up with the biggest defensive play of the game to end the top of the second inning, laying out to snare a potential run-producing double by Ashley Garcia.

That out was the first of 12 consecutive Linfield batters retired by Hagensen between the second and sixth innings. Baxter ended that run with a two-out double to the fence in left field, but Hagensen retired Linfield All-America catcher Emilee Lepp swinging to end the inning.

Hagensen retired Linfield in order in the top of the seventh, getting four-time All-American Staci Doucette on a fly ball, All-American Karleigh Prestianni on a ground out, and Brosig swinging at a drop ball in the dirt for the third strike.

And that's when the dogpile started in the pitcher's circle.

Along the way to the national title, PLU defeated Luther (Iowa) 8-0 in five innings, Linfield 5-3, Montclair State 2-1 in 12 innings, and Linfield again 3-0. Hagensen pitched all 31 innings at the Division III Softball Championship and had a 0.68 earned run average, limiting her opponents to three earned runs on 21 hits with 16 strikeout and one walk.

In PLU's perfect eight-game run through the regional and national tournaments, Hagensen pitched all 58 innings with a 0.60 earned run average, allowing 40 hits, striking out 37 and walking just three.

LUTE NOTES: Today's championship game victory is PLU's first softball title as a Division III member...Pacific Lutheran won National Association of Intercollegiate Athletics (NAIA) crowns in 1988 and 1992 under Ralph Weekly...under head coach Rick Noren, Pacific Lutheran placed fourth in 2002 in its only other appearance at the Division III Softball Championships...this is Pacific Lutheran's second NCAA Division III national title, joining the 1999 football team...the 1999 football and 2012 softball teams have these two things in common - they were both Northwest Conference regular season runners-up (football to Willamette, softball to Linfield), and both won their respective national titles here in Salem...with 45 victories this season, the 2012 PLU team shattered the previous single-season record for victories, which was 40 set in 1990.

RETURN TRIP: The Lutes will be returning to the Pacific Northwest at approximately 1:40 p.m. tomorrow on a charter flight...which they will share with the Linfield team. A campus-wide celebration is planned sometime upon the team's arrival.