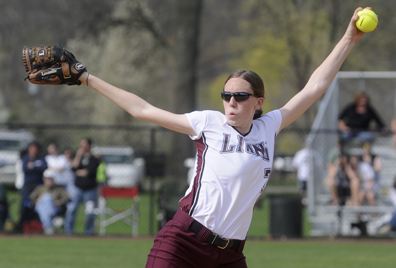 STARKVILLE, Miss. – Junior utility player Nikki Haberkorn of Regis (CO) and sophomore Megan Butterworth of Molloy have been named as the NFCA Division II National Player and Pitcher of the Week, respectively, for games played May 2-8, 2011.

Haberkorn helped lead the fourth-seeded Rangers to the Rocky Mountain Athletic Conference title last week by turning in big numbers and timely hits at the plate. For the week, she was 6-for-12 with five runs, six RBIs, six walks, three doubles, a triple and a home run. She finished the tournament with a .500 batt

While Haberkorn’s offense helped power Regis throughout the tournament, there was probably no hit bigger than her final at-bat. With the game tied, 2-2, in the bottom of the seventh, the Denver, Colo., native sent the Rangers in to the NCAA Tournament with a three-run blast over the centerfield wall for the win.

On the year, the RMAC Tournament MVP is batting .302 with 30 runs, 32 RBIs and 18 walks. After finishing the year at 32-22, the Rangers will now head to the Central Regional No. 1 in Sioux Falls, S.D. where they will take on the top-seeded hosts, Augustana (S.D.), in their first game.

Butterworth helped the Lions win their first conference crown in 16 years this past weekend by going 3-0 at the East Coast Conference tournament. The sophomore allowed just one unearned run off of nine hits with 23 strikeouts and just six walks over 21 innings of work. She finished the week with a 0.00 ERA while limiting batters to a .125 average.

The Bellmore, N.Y., native threw two complete game shutouts over the three-game stretch and averaged 7.6 strikeouts per seven innings. Butterworth helped lead Molloy to the title on Sunday by throwing a four-hit shutout against then seventh-ranked Dowling and striking out a tournament-high 11 batters.

Other Top Performances
Kelsey Haupert of Central Washington helped the Wildcats go 6-1 last week and win the GNAC crown by hitting .583 and driving in 11 runs… West Texas A&M’s Shelby Cockrell played a key role in the Lady Buffs winning the LSC title as she went 2-0 over five games with 31 strikeouts … Mary Giancarlo of Lewis hit a blazing .733 last week with nine RBIs as the Flyers won their second straight GLVC championship… Quincy’s Torie Bunzell helped lead the Hawks to runner-up finish in the GLVC tournament posting a 5-2 record and fanning 78 batters.