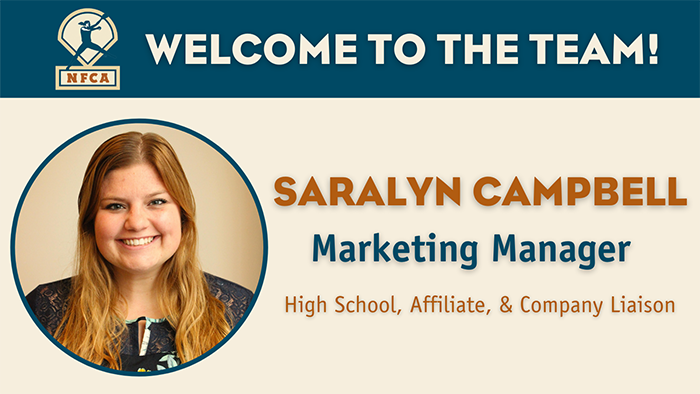 LOUISVILLE, Ky. - NFCA Executive Director Carol Bruggeman with the support of the Board of Directors is pleased to announce the hiring of Saralyn Campbell as the Association’s Marketing Manager.

No stranger to the NFCA team, Campbell has served as the Association’s intern since August 2019. Her willingness to wear many hats and take several projects head on makes the transition to a full-time staff member that much easier.

"From day one of her internship, I knew Saralyn was special,” said Bruggeman. “She is detailed, invested, and motivated. Saralyn possesses a wide variety of skills and has always been willing to develop new ones. Her love of softball, commitment to service, attention to detail, and determined attitude have earned her this opportunity. There is no doubt in my mind she will continue to elevate the Association in her new role on the NFCA team."

As the Marketing Manager, Campbell is responsible for the development and implementation of marketing strategies and communication for the NFCA initiatives, which includes the creation and execution of the Association’s digital marketing and social media plan. Campbell will coordinate all internal Exhibit Hall operations for the annual Convention and Coaches Clinics, while also overseeing the digital auction, something she coordinated and ran in 2020. Additionally, she will serve as the liaison to the NFCA’s High School membership and also work closely with the company and affiliate members.

“As an intern, you get to take everything in and find your niche,” said Campbell. “Now I get to see my two passions collide on a daily basis – softball and marketing! I take pride in creating impactful experiences for coaches. I look forward to continuing to grow, elevate, and advance the NFCA.”

During her time at the NFCA, Campbell has assisted in all aspects of the Association and worked closely with the Director of Events in planning of the Convention, Coaches Clinics and Leadoff Classics. She aided in the coordination and execution of the StrikeOut Cancer initiative, while also tackling graphic design, webpage creation/revamping and special research projects for the Executive Director.

A native of Olympia, Wash., Campbell came to Louisville following one year as the Sports Services Coordinator at the Gulf South Conference (GSC). At the GSC, she assisted in championship operations, NCAA Division II compliance and student-athlete development, while working closely with the commissioner, assistant commissioner and 13 member institutions.