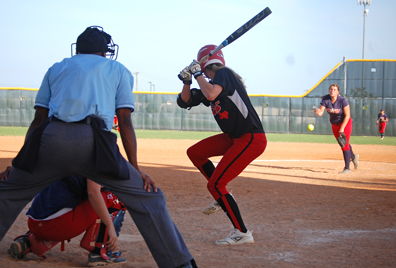 ROUND ROCK, Texas – After two full days of play in the central Texas heat, pool play is complete and several teams have gained momentum heading into championship play Sunday. Of the 58 teams that began play Sunday at the first-ever summer NFCA Top Recruit Tournament, being held at Old Settlers Park in Round Rock, Texas, 36 still have a chance at winning hardware.

Bracket play kicked off in exciting fashion on Saturday and by the end of the day, semifinal match-ups in all seven brackets had been set. The two top brackets in the tournament, the 18U Gold and 16U Blue, will feature some strong match-ups, featuring eight undefeated teams throughout pool and quarterfinal play.

In the 18U Gold bracket, Texas Glory will battle Texas Bombers Gold in the first semifinal after both receiving byes in their quarterfinals. In the second semifinal, Sneaky Cleats Springer and Team TFS Texas-Heintzelman will meet after both winning low-scoring quarterfinal match-ups. Sneaky Cleats eked out a 2-1 win over Aces Express Gold Jacoby, while Team TFS took a 2-0 win over the Austin Stars.

In the 16U Blue bracket, four more undefeated teams will have a chance to settle the score on Sunday, beginning with a semifinal battle between Clash  and SA Hitt. Clash reached the semifinal after dominating Montgomery TKO 8-0 in the quarterfinals, while SA Hitt pulled out a 4-3 win over Texas Groove. La Red Stick Softball 007s will battle Blaze Prinzo in the second semifinal; La Red Stick battled out a 3-2 win over Centex Buzz-Crosslin in its quarterfinal, while Blaze-Prinzo handily beat Tri-County Xplosion, 4-0.

The inaugural 2012 summer NFCA Top Recruit tournament will wrap up on Sunday with semifinal games starting at 9 a.m. CT. Both the Gold and Blue bracket championships will be held at 3 p.m. at fields 1 and 4, respectively. For tournament coverage, click here.