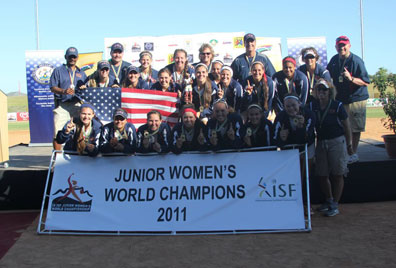 CAPE TOWN, South Africa - The United States claimed the 2011 International Softball Federation (ISF) Junior Women’s World Championship today in Cape Town, South Africa, with a 4-1 defeat of Japan in the Gold Medal Game. After a semifinal loss to Japan on Friday, the Americans topped Chinese Taipei 12-3 in the six inning Bronze Medal Game and then topped Japan to secure the Gold Medal.

“This is one of the greatest days of my life,” designated player Cheyenne Tarango (Anaheim Hills, Calif.) said.

Tarango provided all the offense the Americans needed to claim the title. With bases loaded in the bottom of the fourth, she hit the first home run of her USA Softball career, a grand slam home run over the left field fence.

“Honestly in my head, I was just thinking about a base hit,” said Tarango, who appeared in six games in the tournament. “I thought that if I could just get the first RBI, Lauren Haeger would be able to take care of the rest.”

Pitcher Haeger (Phoenix, Ariz.) did her part in the circle, allowing only five hits to a Japanese team that pounded three U.S. pitchers for 11 hits and nine runs Friday. The sole run crossed the plate in the sixth when a Kylee Lahners (Laguna Hills, Calif.) fielding error allowed third baseman Mina Yamashiro to cross the plate.

“I felt really honored that my team had faith in me,” Haeger said. “I was so excited. To get to pitch against Japan in any game is awesome, let alone the Gold Medal Game. I feel honored to have had the chance to pitch a game like this for my country.”

Haeger struck out eight batters including the last two.

“I was really excited to just get in the Gold Medal Game and play,” she said. “I was hitting my spots and doing everything right today. I was throwing hard. Everything, every pitch worked out.”

The United States finishes the tournament with a record of 10-1, the only loss being the 9-0 five inning loss to Japan.

“It is always tough to take a loss like we did to Japan last night but I think that it was good for them,” Head Coach Karen Johns (Whippany, N.J.) said. “It showed them how much they wanted to have a Gold Medal around their neck and gave them the motivation to fight for it. I am so proud of them and how they performed today. Without a doubt, they deserve to be called Junior Women's World Champions.”

The U.S. qualified for the Junior Women’s World Championship in August 2010 by winning the III Pan American Championships (18-Under) in Bogota, Colombia, with a 9-0 record that included two wins against Canada and another against Puerto Rico. In the Championship Game, Team USA defeated Canada 3-1. The two teams also met in pool play during that event with the U.S. claiming a 3-0 victory. In the semi-final, the Americans defeated Puerto Rico 6-1.