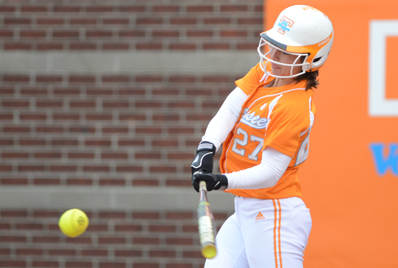 LOUISVILLE, Ky. – An incredible week’s effort, including a school single-game record and Southeastern Conference record-tying three HR’s in one contest, have helped Tennessee’s Lauren Gibson earn the nod as the Louisville Slugger/NFCA Division I National Player of the Week for April 23.

“I feel very honored to be named Louisville Slugger/NFCA National Player of the Week, but obviously without my teammates and coaches this would not have happened,” Gibson said. “I can’t thank them enough.”

The Pasadena, Md., product and senior second baseman hit a blistering .818 (9-for-11) with three doubles, three walks, five HR’s and 18 RBIs as the Lady Vols posted a 4-0 mark versus Appalachian State and Ole Miss (three-game road series). All five of her big flies were of the multi-run variety with four two-run HR’s and a three-run blast. Gibson registered at least one hit and two RBIs in each contest and homered in three of the four match-ups. Her finest effort occurred on Sat., April 20, as she broke the UT record and tied the SEC single-game mark for most HR’s in a single match-up (set by Auburn’s Holly Currie back on April 21, 2001) by going 4-for-5 with the trio of HR’s and a school record-tying nine RBIs. For the week Gibson registered an astronomical 3.255 OPS with a 2.455 slugging mark and a .800 on-base percentage.

“Lauren’s performance last week was truly remarkable,” Tennessee co-head coach Karen Weekly said. “It’s a testament to her commitment to having a great mental approach each at-bat and sticking to her game plan. We’re really proud of her.”

The reigning SEC Player of the Week currently boasts a .439 season batting average, 55 runs scored, 11 doubles and 13 stolen bases while leading the Big Orange with 15 HR’s, a .856 slugging percentage and a SEC-best 58 RBIs.

Next up Tennessee will look to extend its season-best, 19-game winning streak by hosting a three-game series against Arkansas over April 26-28 at Sherri Parker Lee Stadium in Knoxville, Tenn.

Notre Dame’s Laura Winter was selected as the BIG EAST Pitcher of the Week after going 3-0 with a 0.33 ERA and 35 strikeouts over 21 innings of work while also hitting .417 (5-for-12) with three HR’s and eight RBIs against Michigan State and Pittsburgh…Utah’s Mariah Ramirez batted .462 (6-for-13) with two doubles and two RBIs while helping the Utes to a Pacific-12 series win over then-No. 2 Arizona State…Idaho State’s Vicky Galasso was tabbed as the Big Sky Player of the Week for posting a .417 (5-for-12) average with three HR’s and eight RBIs during a three-game set at Portland State…James Madison’s Sarah Mooney hit .706 (12-for-17) with four doubles, a HR and 12 RBIs on her way to earning CAA Player of the Week…Cal State Fullerton’s Jasmine Antunez fired a no-hitter against UNLV while posting a 4-0 pitching mark with a 0.58 ERA and 20 K’s in 24 frames to reap Big West Pitcher of the Week accolades…Mississippi State’s Jessica Cooley hit .600 and slugged at a 2.000 clip with four HR’s and nine RBIs in match-ups against Samford and then-No. 4 Alabama…Longwood’s Brooke Short, the Big South Player of the Week, hit .545 (12-for-22) with a 1.091 slugging mark, seven runs scored, three HR’s and seven RBIs…Big South Pitcher of the Week Kiana Quolas of Coastal Carolina was 5-0 for the Chanticleers with a 1.08 ERA over 26 innings…Missouri’s Chelsea Thomas picked up two victories at then-No. 11 LSU, striking out 23 batters in 14 innings on her way to SEC Pitcher of the Week accolades…Providence’s Jessie Bryant, the BIG EAST Player of the Week, batted .667 (12-for-18) with three HR’s, eight RBIs and a 1.278 slugging mark…Marshall’s Andi Williamson was named the Conference USA Pitcher of the Week for posting a 2-0 mark with a 0.00 ERA and 28 K’s over just 13 innings against Ohio…MEAC Player of the Week Alina Moriarty of Norfolk State hit .500 (10-for-20) with three HR and seven RBIs…N.C. State’s Emily Weiman tossed back-to-back shutouts and was 3-0 overall with a 0.35 ERA and 20 K’s over 20 innings pitched while sweeping Virginia…Canisius’ Robin Kennery, the MAAC Player of the Week, batted .455 (10-for-22) with two doubles, a HR and seven RBIs for the Golden Griffins…Northwestern’s Amy Letourneau batted .692 (11-for-16) with five doubles and was 3-0 with a 2.53 ERA and 28 K’s in earning Big Ten Player of the Week…Atlantic Sun Player of the Week Paige Neely of Lipscomb batted 875 (7-for-8) with a grand slam and six RBIs against Mercer…Stetson’s Meredith Owen was 4-0 with a 0.75 ERA and allowed just a .187 opponent batting average in earning A-Sun Pitcher of the Week…California’s Jolene Henderson, the Pac-12 Pitcher of the Week, registered a 0.38 ERA with 18 K’s over 18.2 frames of effort against Oregon State.

2013 Louisville Slugger Division I National Player of the Week