Texas A&M's May Named to WNT 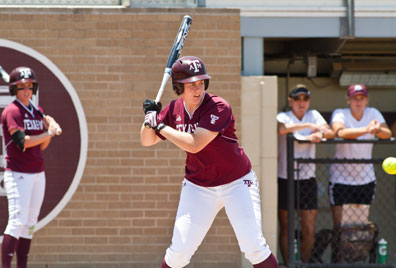 “We are excited to have Meagan join the Women’s National Team for the Pan American Games,” Head Coach Ken Eriksen (Tampa, Fla.) said. “Having Meagan in the program in the past will help her quick transition into a productive player for us.”

Following an outstanding freshman season that saw her named to the 2010 All-Big 12 first team and 2010 Louisville Slugger/NFCA Div. I All-America second team, May was selected for the 2010 USA Softball Women’s Futures National Team but did not compete due to injury. She attended the 2011 USA Softball Women’s National Team Selection Camp at the U.S. Olympic Training Center in Chula Vista, Calif., in June.

"It feels amazing to be given a second chance with this program,” May said. “I am honored to be able to represent my country in an international event, especially one of this magnitude. I look forward to being able to play with the top athletes in the country for women's softball and I am excited for the competition that we will be facing. It will be an experience that I never forget."

Following the exhibition action, May and the Women’s National Team will head to Guadalajara, Mexico, for the XVI Pan American Games, Oct. 17-23. USA Softball is seeking a seventh consecutive and eighth overall Pan American Games Gold Medal. The tournament closes out the 2011 season for the program.