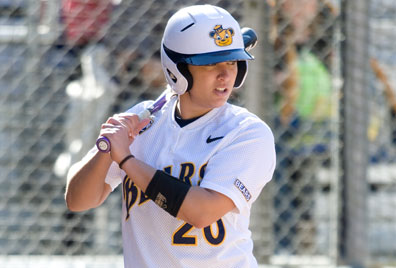 OKLAHOMA CITY, Okla. - The Amateur Softball Association (ASA) of America and USA Softball announced today the top three finalists for the 11th Annual USA Softball National Collegiate Player of the Year Award. This award, which is considered one of the most prestigious honors in Division I women’s collegiate softball, is designed to recognize outstanding athletic achievement by female collegiate softball players across the country.  California’s Valerie Arioto (Pleasanton, Calif.), Arizona State’s Katelyn Boyd (Phoenix, Ariz.), and Oklahoma’s Keilani Ricketts (San Jose, Calif.) are the three remaining athletes in the running and would be the first to win this award from each of their schools.

The 2012 Pac-12 Player of the Year, Valerie Arioto currently ranks eleventh in the country with a 1.32 ERA,  third with a .968 slugging percentage and second  with a .641 on-base percentage. The senior’s 22 home runs rank sixth nationally and she is forth in the country in runs with 64. Arioto leads the NCAA in walks with 87 which is 26 more than second place. In California’s two wins over Arizona State to clinch the Pac-12 title, Arioto hit a walk-off home run in the first game and then pitched a shutout in the second game, striking out 11 Sun Devils. Valerie was the only two-time recipient of the USA Softball Collegiate Player of the Week award this season. The No. 1 California Golden Bears will take on No. 18 Washington this weekend for the opportunity to advance to the NCAA Women’s College World Series (WCWS) in Oklahoma City, May 31-June 6.

A significant contributor to Arizona State, Katelyn Boyd was named to the Pac-12 First Team as well as the league’s overall Batting Champion. The senior is currently second in the NCAA with 72 total runs on the year and fifth with a .571 on-base percentage.  Boyd’s .444 batting average is seventh best in the country and she ranks twelfth nationally with 19 home runs. Including postseason, the senior infielder has started in all 57 games played. No. 2 Arizona State will meet up with No. 10 Louisiana-Lafayette this weekend in Tempe, Ariz., for Super Regionals with the winner advancing to the WCWS.

The Big 12 Player of the Year, Keilani Ricketts currently ranks eighth in the country with an on-base percentage of .566 and thirteenth with a .853 slugging percentage. The Oklahoma junior is tenth nationally with 48 walks. In the circle, she ranks fifth in the NCAA with a 1.05 ERA, third with 371 strikeouts and her 31 wins puts her tenth nationally. Ricketts is second in the nation only giving up 3.64 hits for every seven innings pitched. The southpaw has recorded 1,169 career strikeouts, putting her third on the Big 12 career list. No. 4 Oklahoma will face No. 15 Arizona in Norman, Okla. for Super Regionals this weekend for a chance to move on to the WCWS.

The winner of the 2012 USA Softball Collegiate Player of the Year Award will be announced on May 29 at the athlete only banquet just prior to the 2012 WCWS.