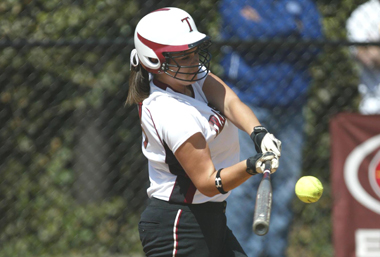 Transylvania sophomore Megan Mitchell has been named the NFCA Division III National Player of the Week for games played April 25-May 1, the Association has announced. Mitchell helped the Pioneers extend a 15-game winning streak en route to a third consecutive HCAC championship. Transylvania sits at 22-11-1 on the year.

The infielder was eight for 10 in four Transy wins last week with four home runs, 12 RBIs, and seven runs scored. Her slugging percentage was 2.000 and her on-base rate was .833. In a 7-0 win over Defiance, she cracked a solo home run and a grand slam, giving her 16 on the year, one short of her school record.

The West Lafayette, Ind., native now has 33 career homers, which is first on the Transy all-time list.