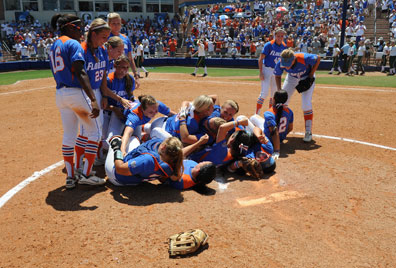 STARKVILLE, Miss. – For the second consecutive week, the Florida Gators are the No. 1 team in the nation, according to the latest USA Today/NFCA Division I Top 25 Poll, that was released by the Association on Tuesday.

Florida (9-0) received 21 of 30 first-place votes on the week and finished the poll 16 points ahead of second-place Alabama. The Crimson Tide (7-0) received four first-place notes, while No. 3 California (8-0) received five. Arizona State (10-2) moved up one spot from last week to fourth, while undefeated Washington (10-0) jumped up two spots to round out the top five in fifth.

Two more undefeated teams joined the poll this week, with Auburn (8-0) debuting at No. 24 and Hawai‘i (12-0) entering the fray at No. 25. Falling out of the rankings this week were a pair of SEC teams in Kentucky and LSU, who were ranked 22nd and 25th in last week’s poll, respectively.

The USA Today/NFCA Division I Top 25 Poll is voted on by 30 NCAA Division I head coaches, one representing each conference. To view the entire poll, click here.