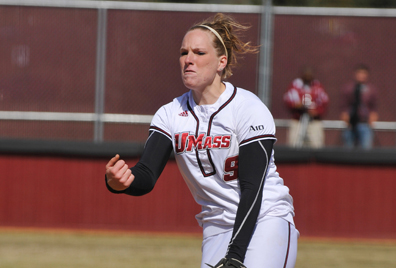 LLE, Miss. – Junior pitcher Sara Plourde of Massachusetts has been named as the NFCA National Player of the Week for games played Mar. 28-Apr. 3, 2011.

Plourde turned in one of the more remarkable performances of an already incredible career last week, as she managed to go 17.2 innings without giving up a single hit. For the week, she was 3-0 with a save, 39 strikeouts and just seven walks. In addition, Plourde turned in a 0.00 ERA and unbelievable opponent’s batting average of .000.

The Bristol, Conn., native struck out 16 batters each in of her two no-hitters against Saint Louis and Dartmouth. She then returned in the second game of each doubleheader to pick up a relief win against Saint Louis and the first save of her career against Dartmouth. Plourde’s stretch of 17.2 hitless innings broke the previous program record for hitless innings, which was set in 1983.

Plourde is currently 11-10 on the season with a 1.51 ERA and an Atlantic 10-leading 244 strikeouts. After going 4-0 last week, the Minutewomen are currently 13-14 overall and 5-3 in league play. This week, Massachusetts will take on Connecticut and Boston University in mid-week non-conference contests, before returning to A10 action against St. Bonaventure this weekend.


Other Top Performances
UCLA’s Andrea Harrison went 10-for-12 last week with two doubles, two home runs and nine RBI as the Bruins went 5-0… Michelle Moses of Fresno State pitched 16 scoreless innings last week, including a no-hitter, as Fresno swept then No. 20 Hawai‘i … Kentucky’s Meagan Aull made each of her five hits count last week as she belted a double and four home runs in the Wildcat’s sweep of then No. 5 Florida… Ellen Renfroe of Tennessee went 2-0 against then No. 22 Auburn last week including a 20-strikeout performance in the Lady Vols’ 10-inning win… Eastern Michigan’s McKenna Russ recorded 11 straight hits last week to finish with 16, 12 RBI, five home runs and four doubles, helping propel the Eagles to a 5-1 week…