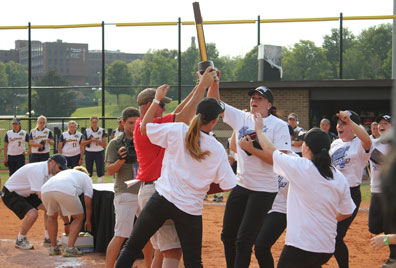 STARKVILLE, Miss. – The 2012 Division II national champion Valdosta State (58-5) received all 16 first-place votes to close out the 2012 season on top of the NFCA Division II Top 25 poll, the Association announced on Wednesday.

National semi-finalist Central Oklahoma (46-8) finished the voting in second, while national runner-up UC San Diego (45-23) and the other national semi-finalist Kutztown (52-7) ended the season tied for third. Rounding out the final top five of 2012 was another National Championship participant, Augustana (SD) (53-12), in fifth.

The first of four new teams in the poll were National Championship participants St. Joseph’s (IN) (40-21) and Flagler (39-20), which joined the fray at seventh and eighth, respectively. After a super regional appearance in the South region, Florida Southern (39-17) also moved into the poll at 18th. Rounding out the four additions to the final poll was another super regional participant, West Virginia Wesleyan (43-14), at 23rd.

The NFCA Division II Top 25 Poll is voted on by 16 NCAA Division II head coaches, two representing each of the eight NCAA regions. Final 2012 records are shown, first-place votes are in parentheses.