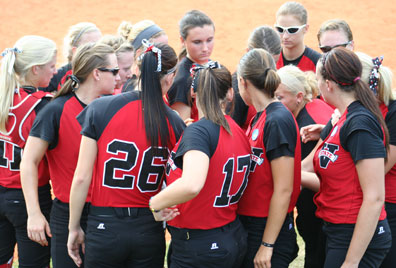 STARKVILLE, Miss. – For the first time in over a month, the same team has topped the NFCA Division II Top 25 poll for a second consecutive week. Valdosta State (32-2) received 14 of 16 first-place votes in the latest edition of the poll to bring stability to the rankings after four weeks of fluctuation at the top.

In the rest of the top five, Indianapolis (33-1) stayed at second this week, while Winona State (28-2) held tight at third. Central Oklahoma (31-3) vaulted up two spots from sixth to fourth, while Kutztown (31-1) also jumped up two spots to round out the top five in fifth.

Indianapolis received one of the two remaining first-place votes this week, while No. 9 Cal State Monterey Bay (29-8) received the other. The Otters catapulted from 16th to ninth in the latest poll after winning last weekend’s annual Tournament of Champions in Turlock, Calif.

Two teams dropped from the rankings this week, making way for two new teams to join the fray. Last week’s No. 20 UC San Diego and No. 24 Bloomsburg both fell from the poll for the first time this season, while Lenoir-Rhyne and California (Pa.) returned to the rankings at 23rd and 25th, respectively.