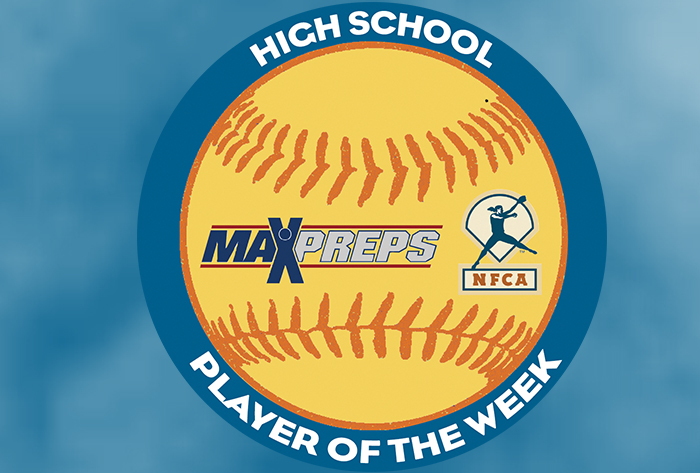 East Region
Hanchuck was 3-0 with a 0.35 ERA and 42 strikeouts. She recorded a pair of shutouts, including a perfect game with 16 strikeouts in a  1-0 win over Tolland. Hanchuck also twirled a five-hit shutout with eight punchouts and a walk in a 1-0 triumph over Ellington. In her final start of the week, the junior hurlers fanned 18, walked one and allowed a run on one hit in a victory against RHAM. Additionally, she chipped in with a home run and two RBI the final game of the week.

North Region
Hitchcock used her arm and her bat to help Eastwood to four victories last week. The junior hurler tossed a perfect game in which she recorded all but one out, fanning 20 batters in a 8-0 win over Woodridge. She also twirled three one-hit shutouts against Rossford (12 K, 0 BB), Buckeye (15 K, 1 BB) and Perry (19 K, 0 BB), the latter a 1-0 victory. For the week, Hitchcock surrendered just three hits, fanned 66 batters, walked just one and held her opposition to a 0.40 batting average. She hit .545 with a double, home run, seven RBI and three runs scored.

South Region
Brooks, a senior captain, was 8-for-9 (.889) with three home runs, 15 RBI and eight runs scored. She slugged 1.888, recorded a .917 on-base percentage and was a perfect 8-for-8 in steals, helping the Raiders to three wins last week. Brooks had a monster outing in game one of a doubleheader sweep of DuVal. She clubbed two long balls, drove in nine and scored three times in a 14-1 victory. Brooks followed that performance by going 2-for-3 with three more RBI and runs scored in the nightcap. In the first game of the week, she was 3-for-3 with a home run three RBI and two runs scored against Northwestern. The catcher was flawless in the field, making zero miscues in 27 attempts.

South Central Region
Fox had a steady week at the plate for the Golden Buffalo, recording six multi-hit games and driving in two or more runs five times. For the week, she was 18-for-21 (.857) with three doubles, three triples, four home runs, 17 RBI and 17 runs scored. In a doubleheader sweep of South, Fox was 7-for-8 with a double, triple, two long balls, seven RBI and five runs. In the opener, she was a single shy of the cycle with four RBI. She homered and drove in four in game two against Liberal. Fox also left the yard and registered three RBI versus East.

West Region
Richard had a big week at the plate for the Fighting Colts, hitting .929 (13-for-14) with two doubles, five triples, two home runs, 17 RBI and 12 runs scored (three in each game). She slugged 2.214 and recorded a .933 on-base percentage. The freshman tripled four times and drove in six runs in game two versus Hatch Valley. She doubled and homered with four RBI in game one. Richard continued her torrid week with a triple, long ball and five RBI versus Socorro in game one, followed by a 4-for-4 outing with a double and two RBI in the nightcap.

every Monday during the spring season with a player from each of five separate high school regions is selected. During the fall campaign, one representative is chosen from the participating regions.