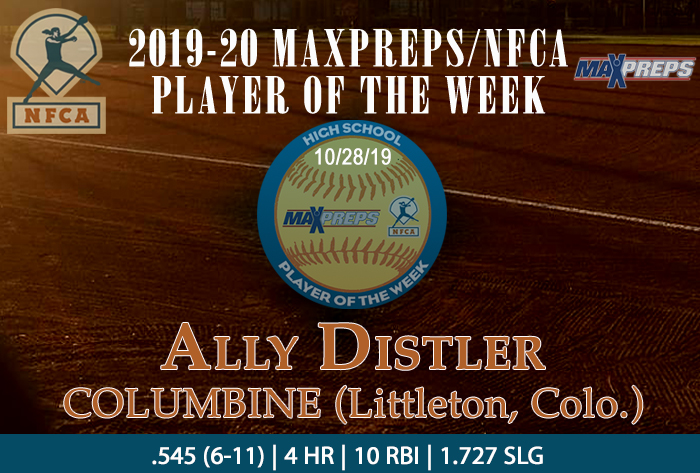 Over four games, Distler hit .545 (6-for-11), launched four home runs, doubled, recorded 10 RBI, slugged 1.727 and scored six times.  In the CHSAA 5A championship game, the program’s first appearance since 1995, she broke a 1-1 deadlock with a second-inning leadoff home run and gave the Rebels a 5-1 cushion over Fossil Ridge with a three-run blast an inning later. The victory capped off a 28-2 season for the Rebels.

Distler doubled, homered, drove in and scored three runs during Columbine’s first-round victory over Valor Christian. She followed that performance with a three-run homer to punctuate a four-run fourth in a 7-5 quarterfinal victory against Legacy.

, the official high school statistical provider of the NFCA, provides all statistics for the NFCA High School Player of the Week award. To nominate a player for the award, the coach must enter his or her athlete's game stats into MaxPreps.com by Sunday evening to be eligible for that week’s award.