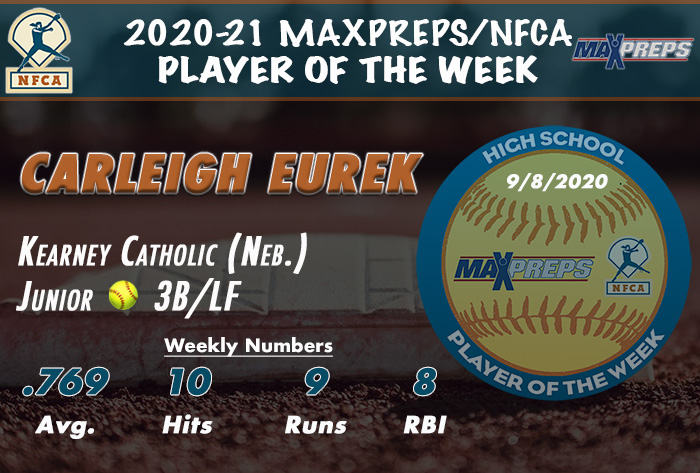 On Sept. 1, Eurek went 5-for-6 in victories over Minden and Grand Island Central Catholic (GICC). She was 3-for-3 with three runs scored versus Minden. Against GICC, the second of Eurek’s two doubles knocked in a pair of runs to tie the game at five-all in the bottom of the sixth. Two batters later, an error on a sacrifice bunt allowed her to scoot home with the winning run. The junior added her second 3-for-3 performance against Aquinas in which she scored three times and drove in three runs. Eurek capped on the week with two more hits and two RBI in a 7-3 win over Twin River.

, the official high school statistical provider of the NFCA, provides all statistics for the NFCA High School Player of the Week award. To nominate a player a coach must enter his or her athlete's game stats into MaxPreps.com by Sunday evening to be eligible for that week’s award.

The MaxPreps/NFCA High School Player of the Week is announced on NFCA.org