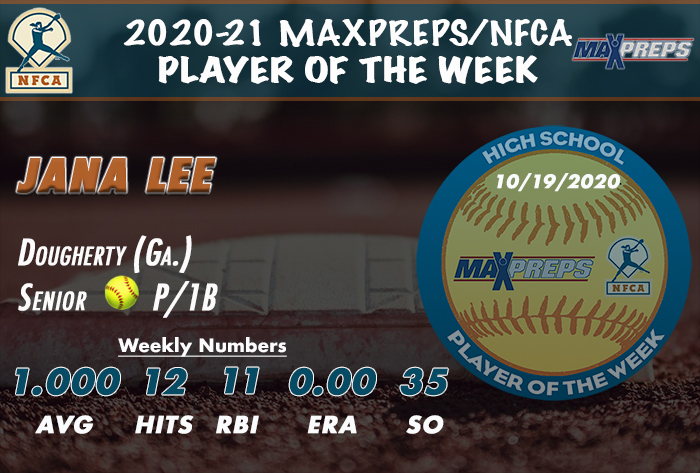 Powered by her bat and arm, Lee keyed the Trojans to three victories last week. The senior was a perfect 12-for-12 at the plate with three doubles, a triple, two home runs, 11 RBI and nine runs scored. In the circle, Lee went 3-0 with a 0.00 ERA and 35 strikeouts in 11 innings of work. She tossed a four-inning no-hitter, surrendered just two hits and walked one.

In two wins over Westover, Lee did not allow a hit in eight innings, struck out 13 in each contest and hurled a game-one no-no. In the first contest, she was a single short of the cycle with six RBI. Lee registered five hits, six RBI and a double in game two. She capped off the week by notching four more hits, three RBI, a double and long ball versus Monroe, striking out nine Golden Tornadoes and allowing two hits over three innings. Lee scored three times in each contest and slugged 1.916 for the week.

, the official high school statistical provider of the NFCA, provides all statistics for the NFCA High School Player of the Week award. To nominate a player a coach must enter his or her athlete's game stats into MaxPreps.com by Sunday evening to be eligible for that week’s award.

The MaxPreps/NFCA High School Player of the Week is announced on NFCA.org