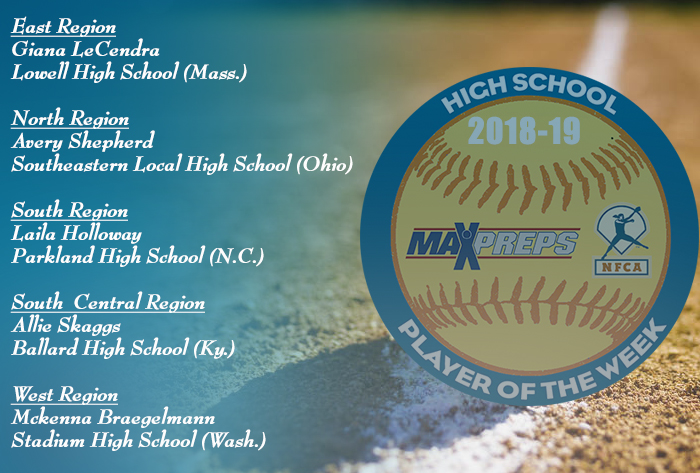 East Region
LeCedra tossed a pair of three-hit shutouts to key the Red Raiders to a pair of victories last week. The freshman righty fanned 17 in a 6-0 win over Lawrence and followed that with 14 more punchouts versus Haverhill. LeCedra scattered three hits in each game and finished the week with no walks and a .128 batting average against.

North Region
Shepherd went 7-for-8 at the plate with four home runs and 15 RBI. She slugged 2.500 and recorded an .889 on-base percentage. She homered, doubled, scored twice and drove in five runs versus Madison Plains. Shepherd was 3-for-3 with two dingers, six RBI and three runs scored against Catholic Central. The junior shortstop homered, crossed the dish three times and recorded four RBI against Northridge.

South Region
Holloway launched five home runs, slugged 2.166 and drove in 18 runs for the Mustangs last week. The sophomore was 3-for-3 with two long balls and eight RBI versus Ben L. Smith. Holloway sent three more over the fence, going 5-for-5 with seven more RBI and four runs scored against North Forsyth. She collected three more RBI in a contest versus Southwest Guilford. For the week, Holloway hit .833 (10-for-12), scored seven runs and registered an .846 on-base percentage.

South Central Region
Skaggs powered Ballard to three victories last week, hitting .727 (8-for-11) as seven of her hits went for extra bases (four home runs, three doubles). She drove in 15 runs, scored seven times and slugged 2.090. All three of the junior’s hits against Scott County left the yard as she recorded seven RBI and four runs. Skaggs went 3-for-3 with a double, long ball and five RBI versus Collins and registered a pair of two-baggers with three runs driven in versus South Oldham.

West
Braegelmann hit .786 with four doubles, a triple, three home runs, eight RBI and nine runs scored. She slugged 1.857 and owned an .824 on-base percentage. On top of that, Braegelmann shined in the circle with a 3-0 record, .074 ERA and 38 strikeouts over 16 innings of work. The junior hurler twirled shutouts against Bethel (game one) and Garfield with 13 and 15 punchouts, respectively. At the plate, Braegelmann launched two homers, scored three times and drove in three runs in a 4-0 win over Garfield. She also went 4-for-4 with a pair of doubles and four runs in game one versus Bethel, while collecting two more doubles and three RBI against Mount Tahoma.

every Monday during the spring campaign with a player from each of five separate high school regions being selected. In the fall season, one representative is chosen from the participating regions.