Neshoba Central back at No. 1 in USA TODAY Sports/NFCA High School Super 25 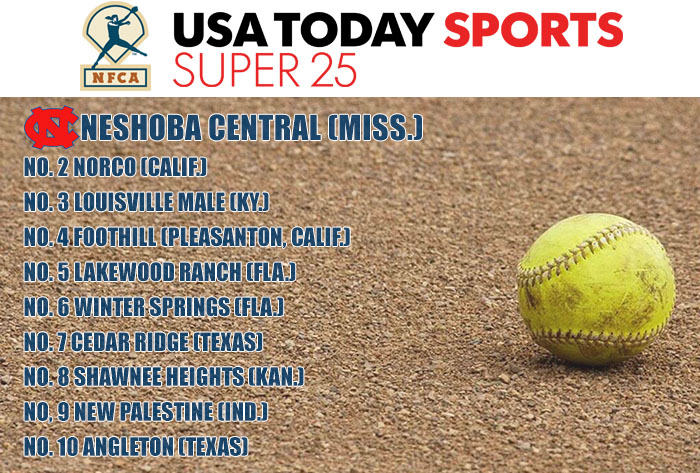 LOUISVILLE, Ky. — It’s been a good week for Neshoba Central.

On Monday, the (32-1) Rockets soared past Lafayette, 17-0, to advance to another Mississippi Class 5A championship series. Today, they regained the No. 1 spot in the USA TODAY Sports/NFCA High School Super 25 poll.

Neshoba will face Wayne County in the best-of-three finals starting later today. Game two is scheduled for Friday, with a third winner-take-all contest to be played if necessary. The six-time defending state titlist Rockets spent the first six weeks of this season in the top spot in the rankings.

Meanwhile, Cedar Ridge (30-1) wasn’t as fortunate, as the Raiders were shocked by Conroe Oak Ridge, 3-1, in a second-round Texas playoff series that was shortened from a best-of-three to just one game due to poor weather. Oak Ridge scored all the runs it would need in the first inning, and added an insurance run on Kennedy Reynolds’ solo homer in the third. War Eagles pitcher Morgan Brandon took things from there, with six strikeouts in a three-hitter.

That allowed teams below them that kept winning to move up in the rankings. Norco (28-1) took over the No. 2 spot after blanking Vista Murrieta, 5-0, Tuesday in their CIF Southern Section playoff opener, while Louisville Male (22-0) powered into third on the strength of Saturday’s 6-2 ranked win over New Palestine (19-2) and two more victories. The Bulldogs now have 50 homers this season.

Elsewhere, Lakewood Ranch (27-0) won twice to finally pass fellow Florida school Winter Springs (26-0) in the rankings and round out the first five. The Mustangs won two games to claim the district crown, then rolled past Pinellas Park, 11-0, on Wednesday in a regional quarterfinal.

Illinois powerhouse Marist (26-2) added six wins to its resume — including sweeps of Marian Catholic and Carmel — to run its win streak to 25. The 16th-ranked Redhawks haven’t lost since the third game of the season on March 15.