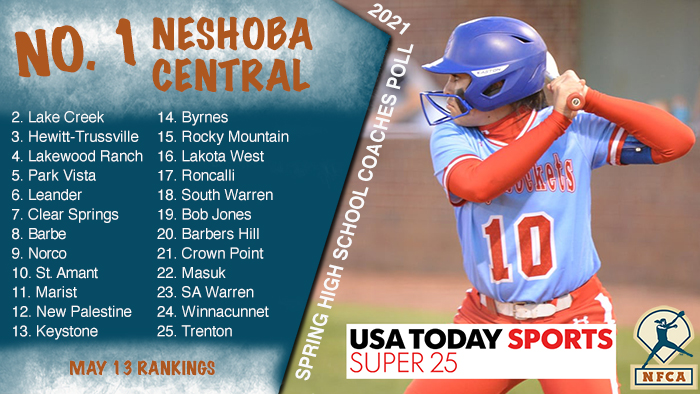 LOUISVILLE, Ky. — Stop us if you’ve heard this before: Neshoba Central advanced to the Class 5A state finals.

The seven-time reigning Mississippi state titlist and No. 1 team in the USA TODAY Sports/NFCA High School Super 25 will face East Central later today in the opener of the best-of-three championship series at the University of Southern Mississippi. Game two will be Friday, with a third game, if necessary, slated for Saturday. The (30-0) Rockets are riding a 37-game win streak.

Meanwhile, No. 2 Lake Creek (36-0), third-ranked Hewitt-Trussville (43-2-1), No. 4 Lakewood Ranch (27-2) and fifth-ranked Park Vista (27-0) all continued to advance through their respective state tournaments and play again in the coming days.

San Antonio Warren (25-2) dropped all the way from sixth to 23rd  after being upset in the final two games of a best-of-three playoff series against Los Fresnos, allowing the eight teams below to slide up one spot each.

Elsewhere, Connecticut’s Masuk (14-0) and New Hampshire’s Winnacunnet (4-0) are new to the rankings this week.