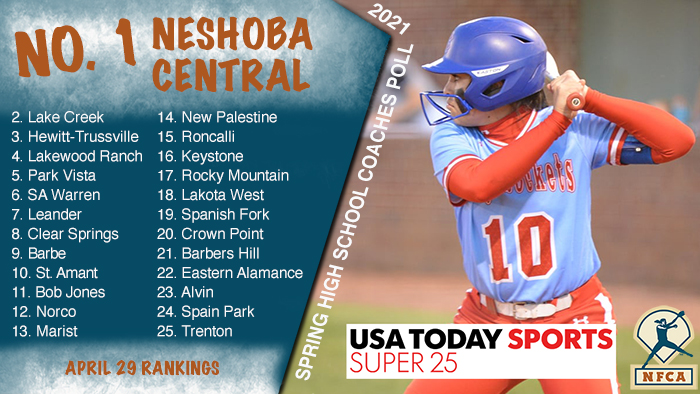 LOUISVILLE, Ky. — There was some jostling in this week’s USA TODAY Sports/NFCA High School Super 25 poll, but not at the top, as perennial power Neshoba Central continued to win and remained No. 1 for a fourth-straight week.

The (25-0) Rockets defeated West Lauderdale last Thursday in the Mississippi playoffs, then defeated Center Hill twice this week to win their 42nd straight game. Neshoba hosts Grenada in the third round of the playoffs on Friday, with game two of that series set for Saturday on the road.

The (22-4) Chargers dealt the seven-time reigning state 5A champs their last loss, 5-2, on April 26, 2019, in the first game of a best-of-three playoff series ultimately won by Neshoba.

Every other team in the top 10 kept winning, including No. 2 Lake Creek (32-0), which scored victories over Caney Creek and Lovelady; third-ranked Hewitt-Trussville (40-2-1), which rolled past Tuscaloosa County; and No. 4 Lakewood Ranch (24-2), which defeated Riverview on Tuesday in the Florida district semis.

Los Alamitos (10-3) suffered two more losses to drop out of the rankings this week, with one-loss Ohio power Lakota West (18-1) the newcomer at No. 18. The Firebirds’ lone defeat of the season was a 5-1 setback against unbeaten Indiana powerhouse and No. 15-ranked Roncalli (14-0) on April 17.