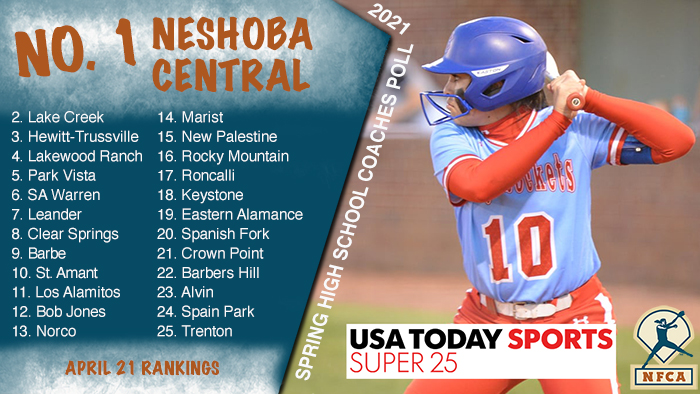 The (22-0) Rockets had a rare close game, edging Holmes Central just 1-0 last Thursday, but rolled past Choctaw Central, 9-2, the next day. Neshoba will vie for its 40th straight win when it hosts West Lauderdale tonight. The Rockets’ last loss came April 26, 2019, when they dropped the first game of a best-of-three playoff series, 5-2, to Grenada.

Meanwhile, Emiley Kennedy no-hit Cleveland and had 12 strikeouts in a 12-0 rout for second-ranked Lake Creek (30-0) on Tuesday, which followed up Ava Brown’s 11 strikeouts in last Friday’s district-clinching 14-0 triumph over Porter. The Lions have won 34 straight and 45 of their last 46 games.

The first eight teams remain unchanged, as all but Leander (29-0), who didn’t play, added wins to their resumes. Louisiana standouts Barbe (26-2) and St. Amant (23-2) both are in the top 10 now following Los Alamitos’ 3-2 loss to Pacifica on Wednesday.

The lone newcomer to the poll this week is Indiana’s undefeated Roncalli (11-0), which dealt Ohio power Lakota West its first loss, 5-1, last Saturday.