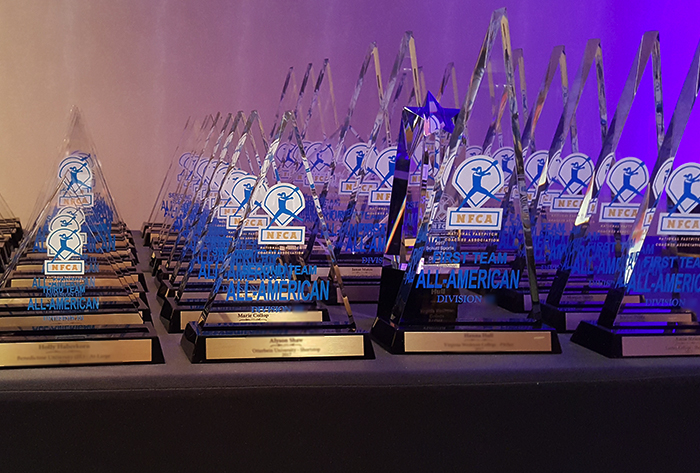 Headlining the first team are six 2017 Gatorade National Players of the Year from the states of Alabama, Arizona, Florida, New Jersey, Oregon and Virginia.

Lung, a junior, went 24-4 with 1.04 ERA and 263 strikeouts helping her squad to a CIF-Central Section title. The three-time conference pitcher of the year posted 10 shutouts, walked just 35 batters and held her opposition to a .173 batting average.

Sandercock is earning her second All-America honor after being selected to the NFCA’s third team in 2016. The junior righty dominated her opponents in guiding Bishop O’Connell to an undefeated 27-0 season and a Virginia Independent Schools Division I State Championship. She surrendered a mere four runs, two earned, and 35 hits, while fanning 330 and walking just 19 in 151 innings of work. She registered a microscopic 0.09 ERA and 20 shutouts in 23 starts and held her opponents to a .071 batting average. A dual threat, Sandercock hit .471 with 10 doubles, seven triples, eight home runs, 57 RBI and a 1.023 slugging percentage.

Behind her arm and bat, Rodriguez helped Northern Valley Old Tappan to a North 1 Group 3 State Sectional Championship. The New Jersey Gatorade Player of the Year was 21-6 with a 1.15 ERA and 185 strikeouts to just 34 walks in 177 innings. The UCLA signee posted eight shutouts a .198 opponent’s batting average against. She also did a lot of damage at the plate, hitting a robust .644 with 25 of her 47 hits going for extra bases. Rodriguez’s 12 doubles, five triples and seven long balls attributed to her 1.250 slugging percentage. Additionally, she drew 32 walks and recorded a .750 on-base percentage.

Rounding out the hurlers is Sprofera. The southpaw generated a 20-3 mark with a 0.82 ERA, 10 shutouts and 213 punchouts in 145.2 innings. In surrendering just 67 hits, the two-time All-American held the opposition to a .158 batting average.

The first-team All-America selection at first base is junior Meredith Slaw of Rappahannock (Va.) High School. One of the top offensive players in Virginia, Slaw hit .600 with 51 hits, 13 doubles, 10 homers, 49 RBI and 39 runs. She slugged 1.200 and tallied a .642 on-base percentage.

A pair of seniors- Mikayla Rojas from Heritage Academy (Ariz.) and Sammie Stefan of Keystone- garner first-team nods at third base. Rojas was a hard out as she hit .881, slugged an astronomical 2.355 and recorded a .895 on-base percentage. The Arizona Gatorade Player of the Year generated 52 hits in 59 at bats with 13 doubles, seven triples and 20 home runs. Rojas, who finished her career with an Arizona Canyon Athletic Conference career home run record, drove in 71 runs, scored 55 times and stole 29 bases in 30 attempts. Stefan, a two-time first team All-American, batted .532 with 50 hits, 14 doubles, five triples, nine long balls, 53 RBI and 47 runs. The Maryland commit, slugged 1.074 and committed just one error at the hot corner (.980 fielding percentage).

Representing the first team at shortstop is Marist (Ore.) High School’s Lauren Burke and Sides. Burke, a senior headed to Oregon in the fall, earned her second first-team selection after hitting .622 with 61 hits, 13 doubles, nine home runs, 39 RBI and 59 runs. The four-year starter slugged 1.112 and was a perfect 26-for-26 in stolen bases. Named Alabama Gatorade Player of the Year, Sides posted astronomical numbers setting state and national records with 109 runs scored and 99 stolen bases in 66 games. The Alabama signee hit .606 with 120 hits, 18 doubles, 13 triples, 13 home runs and 85 RBI.

Rounding out the first team is a trio of outfielders- DePaul Catholic High School’s Amanda Ayala, Madison North Hopkins’ Kaylee Tow and Lucas Lovejoy High School’s JoJo McRae. Ayala hit .583 with eight home runs and 28 RBI as a leadoff hitter for the Spartans. The Tennessee signee posted a .615 on-base percentage and a 1.083 slugging percentage while leading her squad to its sixth consecutive Passaic County Tournament championship. A member of United States JWNT, Tow was named Kentucky’s Miss Softball and helped her team to a KHSAA state title. In 2017, Tow collected 81 hits in 130 at bats for a .623 average. She set a state single-season record with 23 home runs and 45 walks, while recording 18 doubles, 63 RBI and 90 runs scored. Additionally, the Alabama signee slugged 1.354 and owned a .699 on-base percentage. McRae, a Maryland signee, hit .718 with 71 hits, 39 RBI and 62 runs scored. The speedster swiped 48 bases in 48 attempts, recorded five triples and a .772 on-base percentage.

The NFCA High School All-America teams are selected by a committee of member head coaches from the pool of players who earned first-team All-Region recognition in the five high school regions.