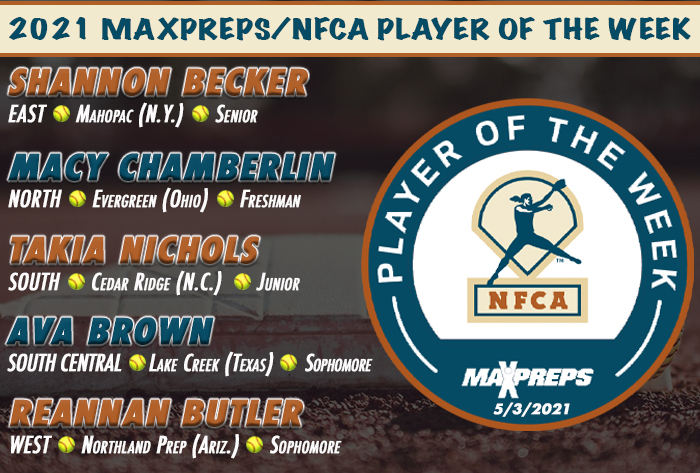 Becker tossed a pair of two-hit shutouts with 25 strikeouts to just one walk to open the 2021 campaign. In a 1-0 nailbiter against Lakeland, she struck out nine and did not issue a walk. Becker was also dominant in her first start of the year, fanning 16 Clarkstown North batters in a season-opening victory. At the plate, the senior hurler went 4-for-8 and scored three runs, including the game-winner in the top of the seventh against Lakeland.

Chamberlin was nearly perfect at the plate, going 9-for-10 with a double, four home runs, 13 RBI and 10 runs scored. She slugged 2.200 and registered seven walks and a .941 on-base percentage. The freshman homered in her final three games, including twice against Delta, a game she finished with four RBI and three runs scored. In the final game of the week against Gorham Fayette, Chamberlin doubled, left the yard once, drove in five runs and scored four times. She also collected four RBI and three runs versus Rossford.

Nichols was lights out at the plate as six of her eight hits went for extra bases, including five home runs. For the week, she was 8-for-9 (.889) with 12 RBI, eight runs scored, a .909 on-base percentage and a monstrous 2.667 slugging percentage. She homered twice against Vance County (4 RBI, 3 R) and in game one versus Southern Durham (5 RBI, 3 R). In game two against the Spartans, Nichols hit her fifth home run of the week, drove in three and scored twice.

Brown was unhittable in 11 innings last week, tossing two no-hitters, including a perfect game. The sophomore hurler struck out 31 of the 35 batters she faced and walked just one. Against Magnolia, Brown went all seven and fanned a season-high 20 batters in her perfect game. In a four-inning win over Lovelady, she struck out 11 and issued a free pass. Brown also helped herself out at the plate, going 6-for-13 with three doubles, a home run, eight RBI and three runs scored. She drove in five against Caney Creek and homered (2 RBI, 3 R) versus Lovelady.

Butler keyed her squad to four wins with her arm and bat last week. She was 3-0 in the circle, surrendered one hit, struck out 33 and walked two in 15 innings of work. Butler twirled two five-inning no-hitters against Glendale Prep Academy (12 K) and North Pointe Prep (10 K), while tossing a one-hit shutout (11 K) versus Valley Lutheran. At the plate, Butler hit .643 (-9-for-14) with two home runs, both against Valley Lutheran, and eight RBI. She was 4-for-4 with two RBI and two runs scored in game one versus Glendale Prep and drove in three runs versus Valley Lutheran.

every Monday during the spring campaign with a player from each of the five separate high school regions being selected. In the fall season, one representative is chosen from the participating regions.