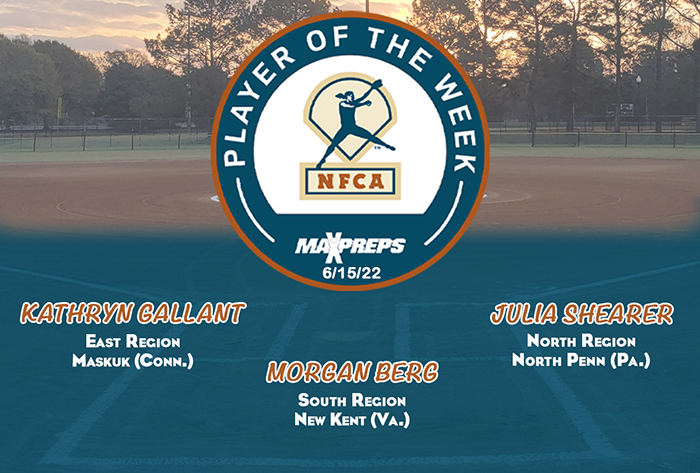 Gallant was 2-0 with two shutouts and 20 strikeouts, keying the Panthers to their fourth consecutive Connecticut Interscholastic Athletic Conference Class L state championship. In the title game against Waterford, she blanked the Lancers on four hits, struck out eight and walked two. She also proved a two-run single that doubled the lead to 4-0. Gallant twirled a two-hit shutout against Bristol Eastern in the semifinals, fanning 12 and issuing one free pass.

Shearer played a pivotal role in North Penn advancing to the Pennsylvania Interscholastic Athletic Association 6A state championship game.  The junior hurler tossed a pair of shutouts, while also hitting .857 (6-for-7) with a double, home run, three RBI and five runs scored. Shearer blanked Whitehall on two hits and struck out 13 in a 5-0 quarterfinal win. She also went 3-for-3 with two doubles, and three runs scored. In a six-inning semifinal victory over Williamsport, Shearer went 3-for-4 with a home run, three RBI and two runs scored, while holding the Millionaires to a hit, striking out 11 and walking one.

Berg keyed New Kent to its first Virginia High School League Class 3 crown. She twirled a pair of shutouts against Fort Defiance and Lord Botetourt, striking out 16, walking two and surrendering just three hits. In the 2-0 semifinal win, Berg fanned six, walked one and allowed one hit, while also driving in one run. In the championship tilt (3-0 victory), she held Lord Botetourt to a pair of hits and struck out 10 with one RBI at the plate.

Winners are announced on NFCA.org

every Monday during the spring campaign with a player from each of five separate MaxPreps’ high school regions being selected.

The NFCA (National Fastpitch Coaches Association) is the professional organization for fastpitch softball coaches. Known for its highly-regarded high school and collegiate weekly player & pitcher of the week award, the NFCA also educates and supports softball coaches on a variety of different levels: from podcasts to awards, to in-person events and National Convention.